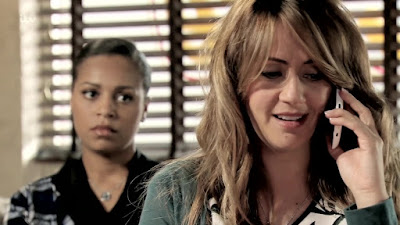 Panto award: A Classic case of the wrong end of the stick. "Luke doesn't suspect a thing" with Luke's sister? Oh, She's behind you!

Contrived Cliche award: See above, and also see Lloyd answering Andrea's phone so that he could find out about what she'd done. My most hated of all the hated cliches.

Phrase of Doom award: Tracy "This isn't just a fling. I reckon we can really make this work this time" and "This time, it's forever"

Dab hand award: Maria told Steph, sarcastically, that she had no idea how to keep a man. Well, actually, Maria's not very good at it, is she? Last person to be giving advice on keeping a fella! 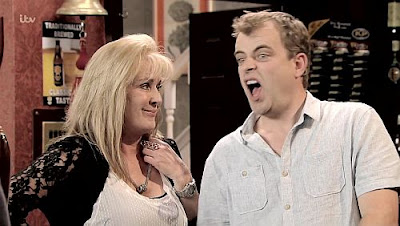 Gurn-o-matic award: Steve's gurns are infamous but even more so when he's trying to cover up something, in this case, that Rover has indeed returned.

Taking Liberties award: Ever since Tracy and Robert got together, she's in and out of that tiny restaurant kitchen causing interruptions yet neither Nick nor Leanne ever seems to catch her at it.

Slippery Slope award: Simon's sliding, not just the alcohol incident, but he's violent, he's manipulating Leanne and he's not getting the help he desperately needs.

Optimistic award: Tyrone thought he could put a tent together without instructions because he's a fully qualified mechanic. You know what happens next. 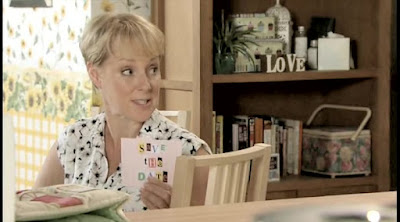 Lines of the week:
Sally about Mary's card "I looks more like a ransom note. If that came through the door, I'd be worried that an ear would fall out of the envelope" (*snork*)
Sally about Rita "She made it up so she could get away from 'Mary, Mary, the Wedding Fairy'"
Amy about her mother "I was in the fire, remember? She just stood in the street screaming. When to *I* get the afternoon off?" (Amy rocks!)
Steve "what's more important? A load of old vinyl or your girlfriend?" Lloyd "Don't be stupid. Those records are me life! Joking!" (ah, but are you?)
Tracy to Robert "So, you're good in bread, and all?"
Rita about Norris "Forgot his name. Complete memory blank. Like I never met him. Mind you, that could be wishful thinking"
Sally to Anna "Kirk's a man of few words and you, you talk a lot" (a LOT)
Luke "I'm a man. With mouse like tendencies" (and that's why I like Luke!)
Andrea "You got a WiFi password?" Steve "Yeah. Traitor123"
Amy "You know when you said mom was being nice because she wanted something? Was it 'weird nice' like she's doing now?"
Tracy "We were made for each other. This time it's forever" (virtually assuring it'll blow up in her face)
Tyrone "I'm a fully qualified mechanic. I just look at the parts and I see how to put them together." (ahem)
Dougie "I love the way camping brings everyone together!"
Beth after Dougie's sad story about the deer "I don't know about you but I could eat a horse" (snort)