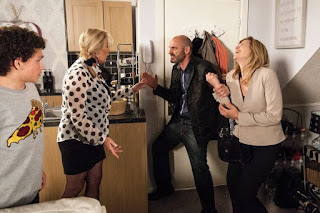 (This post was originally posted by Graeme N on the Coronation Street Blog in July 2015, reposted with permission.)


Last night I caught up with Monday evening's Coronation Street which focused on Dan Dan the Brewery Man's drunken revenge on Leanne and Liz. Apart from the fact I love Liz, I think Leanne is a great character and Dan was in Bugsy Malone as a child actor, the whole thing bored me rigid.

I thought the whole denouement was very tired and it felt like we'd been there many times before. I also thought it was a deeply unpleasant, nasty element to reveal to Simon about Leanne's past. It wasn't an easy watch. As with many aspects of Corrie these days, we also knew in advance what the outcome would be. I do think the decision to explore a domestic violence storyline between Leanne and Simon is an interesting direction to go in however how much more pain and suffering can they inflict on either character? As an aside I thought the scene in the kebab shop with Chesney, Lloyd and Andrea was woeful and wooden.
Anyway, my main point regarding this latest explosive storyline is the pacing. In my mind Coronation Street has two major issues at the moment with the way storylines are paced out across episodes. As with Jenny's balcony breakdown several weeks before, Dan's siege in the kebab shop flat dragged on across too many scenes and episodes. I don't understand why it is planned that way as the pacing was like swimming through concrete. All dramatic tension was lost as we broke away from scenes of Dan stomping on Leanne's phone to Ken enjoying a bit of stuffed marrow chez Barlow. 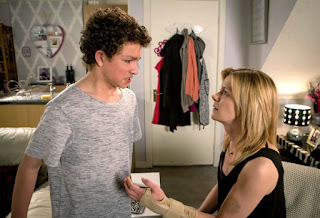 By cutting away so many times it prolongs everything but not for the better. It ends up feeling all bloated and sluggish. At the same time, some stories appear and disappear almost within the same episode - Luke's t-shirt fiasco springs to mind. However, in that case I'm quite glad that one did vanish without a trace.
As with many Corrie storylines these days, the after effects of the supposedly ratings grabbing scenes are far more enjoyable. Tonight's Corrie showed that again, with both Beverley Callard and Jane Danson on top form.

Before people start saying I'm nitpicking and I'm never happy, there are some aspects of Corrie I'm loving at the moment. I think Tristan Gemmill is a great addition as Robert Preston Mark II. I know there is a secret wife lurking and it's a given he'll end up as Bistro chef, but I think it is bringing out a different dimension in Tracy and I'm all for that. I also love the friendship between Tracy and Beth. Beth brings another side to Tracy and it rights a very common wrong in Corrie - nobody has any friends! 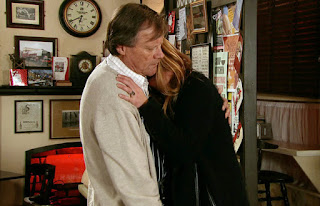 It was also lovely to see scenes between Ken and Emily the other week. Emily is normally only seen with Rita and/or Norris so it was a treat to see Corrie's two longest serving actors together. Also, although I have found Carla's descent into yet another addiction deeply tiresome and unbelievable, it did give us several cracking scenes between Alison King and David Neilson. Two of my favourite Corrie actors who have developed a wonderful odd couple friendship on screen. It was so touching to see Roy demonstrate how much he cares about Carla.
On a final, less positive note can the writers please stop making Gail a comedy drip of a character? I find it loathsome and cringemaking to watch. Gail, although always being flawed, used to have a spine, run her own business and Helen Worth used to portray her as a character the viewing audience could root for, whether it be her battles with Ivy, her troubles with Brian, Martin or Richard or her dreadful children. 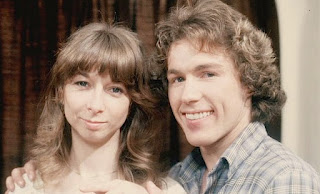 These days she's restricted to a twittery damp squib. It is so important for Corrie to depict strong, mature women and Gail is one of the few middle aged women in the programme with proper history, so please ITV, don't waste it.