(This post was originally posted by Clinkers (David) on the Coronation Street Blog in December 2012.)


We arrive in the twenty first century, one which began in Weatherfield with the clatter of Raquel Watts returning to the cobbles for one night only. It was a sensational decade for the Street in more ways than one but you could always count on Christmas to bring the residents together. Couldn't you?

It's Christmas 2000 and Jason Grimshaw made his debut and was introduced to Eileen's latest squeeze, Dennis. Ken and Deirdre served up a tense festive meal made worse by Peter's comments and Liz storming out. Kevin admitted to feeling guilty about Alison's death (remember her?), Andrea Clayton visited Jack and Vera and over at the café, Roy and Hayley played host to young Wayne. 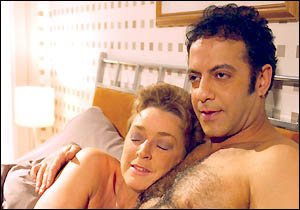 2001 gave us, arguably, one of the most repulsive festive spectacles (therein lies a clue) ever witnessed. Other things were afoot though. Roy and Hayley attempted to run a free food service for the homeless but no one turned up at the café. However all was not lost as, due to a gas problem, Fred, Eve, Sally, Ashley and Maxine all ended up there for lunch. A drunken Peter lashed out at Deirdre. She stormed out of number one and into the arms of Dev Alahan. A nation shuddered.

By 2002, Emily is front and centre of Christmas celebrations. She hosted Norris, Rita, Audrey and Archie. A later visit from Richard Hillman almost cost Emily her life. Elsewhere, Blanche deserted the Barlows and turned up at Emily's for lunch. Unhappy with the throng there, she returned home where, joy oh joy, Tracy showed up.

Poor old Norris wrecked dinner for Emily and Rita in 2003 by forgetting to switch the oven on. Even worse, Betty travelled to 'my Gordon' only to find him gone! She spent Christmas at the Rovers. Blanche, in generous mood, bought number 7 for mum-to-be Tracy. Father-to-be Steve threatened to kill Tracy if she ever mentioned that he is the dad. Oh and Tyrone has a drunken snog with Fiz. To be revisited in nine years time . . . 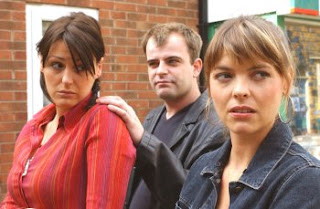 It all kicked off with Tracy, Steve and Karen at Christmas 2004. After trying to mow Karen down in a car, Tracy faced her nemesis on the factory roof. There can be only one winner and Steve eventually sent Karen packing. Ashley married dreary Claire, with Joshua wearing his Spiderman outfit. Kirk confused his gifts and presented Cilla with a bone and Schmeichel with a pair of tights.

2005 was the year when Cilla and Yana attempted to deep fry a turkey. Result? One burnt-out chip shop! Mike's health gave cause for concern, especially when he failed to remember that his brother was dead. Vera bought Jack a burial plot for Christmas and Claire's present to Ashley washer announcement that she was pregnant.

There's another memorable Christmas at Gail's home in 2006. Audrey was not only tucking into turkey but also Bill Webster. However, his wife Maureen arrived and managed to destroy a table and a plum pudding within minutes. Over at the Grimshaw's, a young girl dumped a baby on Eileen claiming that it was Jason's. Molly trains Jack and Tyrone to tidy up, much to Vera's surprise. At the Rovers, Steve provided dinner for Ken, Deirdre and Blanche!

Festive punch ups for all at Christmas 2007. Kevin floored John Stape for having a relationship with the ditzy Rosie. Roy faced the festive season without Hayley and made do with Becky instead. Sarah thought that moving to Italy could be a new start for her, Jason and Bethany but David seethed at the injustice of it all. Over at the Rovers Michelle pretended to be having a good time for the sake of Ryan. The old, docile version with the Munsters' hairdo. Forgotten him already . . . 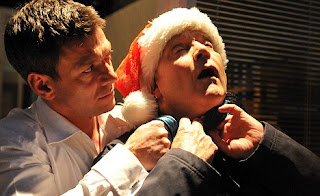 There's a new Mr Nasty in town by 2008. Tony Gordon thought he had killed Jed Stone but the old man had survived. Gail and Joe's Christmas was invaded by the Windasses who caused mayhem. Joe eventually left his own party. Becky and Steve continued their secret relationship amidst the Santa's grotto that was Street Cars.

A whirl of emotions hit the Street as the decade ended. Kevin decided to make a go of things with Molly but on Christmas Day 2009, Sally announced that she had breast cancer. This seemed to act as a wake up call to Kevin but Molly was not happy. There was tension at the Barlows too thanks to the Battle of the Grandads as Ken and George squared up to each other. Nick Tilsley returned, looking at least ten years older than Gail but his arrival is less than popular with Tina. At the Rovers, Steve decided that Amy needed a new brother or sister. Becky wasn't so sure. 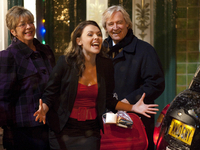 Christmas 2010 and the Street is peopled by the bereaved and confused. Claire was a widow, Molly was dead and Kevin had become a figure of hatred. Tracy Barlow returned to make the festivities go with a whimper. In a particularly chilling moment, Rita sangA Winter's Tale to the aforementioned bereaved and confused.

By 2011, we were watching the final, self-destuctive Christmas of Becky McDonald plus Steve's engagement to the ever-lovely Our Tracy. Carla and Peter got jiggy amongst the threads and needles of Underworld and there was joy for Chesney and Kay-teh as they arrived home with their new offspring. 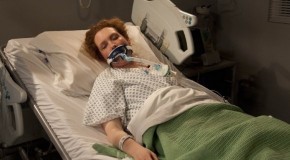 Here we are then, at 2012. This year we get to see if Leanne, the Harridan Bride, marries the fun-free zone known as Nick or whether she absconds with creepy, Californian New Peter. Add to this the prospect of Fiz going bang courtesy of an old boiler (insert any one of fifty names), Tyrone waxing himself silly and Jason getting to grips with some tough old bird in the Rovers' Backroom and you have all the ingredients for a very Corrie Christmas.

God bless them, everyone!

Email ThisBlogThis!Share to TwitterShare to FacebookShare to Pinterest
Labels: christmas