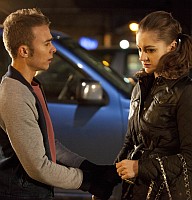 (This post was originally posted by me on the Coronation Street Blog in January 2013.)

Isn't it funny how "what goes around, comes around"? Here's Kylie pregnant with a baby that could be her husband's, but it could be her brother-in-law's as well. She's already said she wasn't ready to have another child which caused the rift in her marriage that brought us to this point.  If you read the spoilers for next week's episodes, you know Kylie confesses to a friend, Eva, that she's going to have an abortion and she gets as far as the clinic. Eva tells David and David runs to talk her out of it, not knowing, of course, that the baby might be Nick's and he talks Kylie into coming home from the clinic for now.

Let's go back 20-odd years. Another woman, a widow, finds herself pregnant by a younger man. She doesn't want to tie the man down to her and decides to have an abortion. She confides in her best friend and that friend, Sally, tells her husband who runs straight to the father of the baby. That man, Martin, manages to talk Gail into not going ahead with the procedure and they eventually marry and raise the baby.

Back to the future, now, and that child, David, discovers that his mother had considered an abortion and he goes mental. Now, he's in the same situation that his father was in. I wonder if the irony has occurred to David? If this baby is born and grows up, will he/she discover that Kylie nearly had a termination? Will that child turn into a clone of a troubled David?