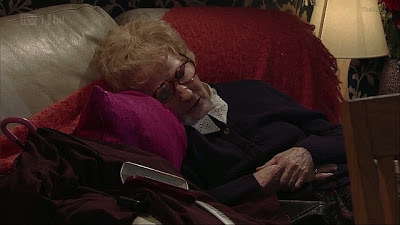 Deja Vu award: Emily babysitting and dozing on the sofa. Is she dreaming of Richard Hillman? The back door was unlocked, too. You'd think she'd be a bit more cautious, considering.

Carla Who award: Peter is wasting no time attempting to skate back into Leanne's affections under the guise of expressing regrets and making apologies.

Shout out to the past award: Tyrone remembering the burger van he ran with Molly.

Hypocrite award: Tyrone might have been sincere about how he feels about family but he wasn't about making his future with Kirsty.

Christmas Fail award: Poor Kirk. Stolen turkeys. Having to buy the rest outright and Beth's son had to buy the present for Beth.

And a last peek at the cutting edge Christmas Fashion! 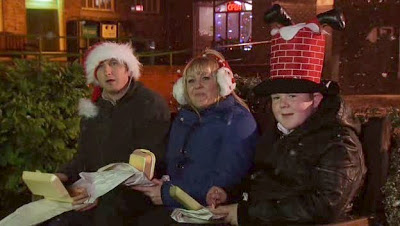 Ms. Obvious Award: Sophie can protest all she likes. She's clearly got a thing for Jenna.

Compromise Fail award: Why is it always the women that have to give in and make the first move in a stalemate?

Performance of the week: Jane Danson. Drunk, scared, defiant, angry, emotions of Leanne all over the place. Riveting.

Mike Baldwin channeling award: Compared to hard case Rob, Mike Baldwin was a pussy cat! Merry flamin' Christmas, Robbo! At least he got taken down a peg or two now Carla's back for good.

Lines of the week:
Kirk about the floating turkeys "When you suggested chucking them in the canal, I thought you must know something I didn't" (about ice floating)
Kirsty "Nothing's gone wrong. It's all been perfect!" (Phrase of doom alert!)
Vicar "A wedding is a lifetime promise"
Fiz "I'm crawling round bins in back alleys in the middle of the night. Freezing. And why? Because I gave a mate a card on his birthday"
Kirk "I'm dead meat." Craig "A bit like that turkey"
Tina "Take her to court, don't take her up the aisle"
Gail to Kylie "It's not giving in. It's growing up" (so why is it always the women that have to "grow up", not the men?)
Deirdre "We've got to watch the turkey and stuff It's A Wonderful Life"
Marcus "Sean you're better than this" Sean "I'm SO not"
Peter to Leanne "You're moving on, yeah, but are you moving forward?"
Roy "I've got a new recording of Chopin's Nocturnes to enjoy and a weighty Trollop to deal with" (Oh?)
Leanne to Peter "I think I preferred you more when you reeked of whiskey, cigarettes and sick" and "It's Christmas...talk turkey"