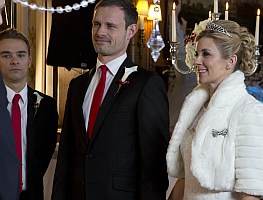 Happy the Bride the sun shines on. Well it seemed to dawn a bit grey, overcast and snowy. The groom was pretty chipper but Leanne was hungover and pale, unsure and necking painkillers. Nick gave Leanne a beautiful diamond tiara in place of the cheap plastic one she wore at their first wedding. Leanne is determined to marry him because... he'll make *her* happy.  What about the other way around? She's looking pretty pale and bedraggled, I think Maria has her work cut out for her.

The registrar is the same one that always does weddings at the register office. The venue looks like a fairy land. The bridesmaid looks like a dog's dinner in plunging cleavage and hot red. The bride is having major wobbles and ran over to see Peter. Surprise! Carla's there too! Carla didn't believe Leanne's story that Peter was nuzzling around her, not at first. Therefore, she's determined to marry Nick as a consolation prize.  But Carla knows him very well. He certainly was doing the fancy footwork trying to get her on side. He does love Carla but he still loves Leanne. He wouldn't have gone to Leanne if Carla hadn't left him but that spark is still glowing.

It all made Leanne decide to love the one she was with, albeit late to the wedding venue venue. She walked down the aisle looking like she actually meant it, with Eva bringing up the rear with a face like thunder. Eva just couldn't stand it and blew the whistle. She must know she can never get Nick back, but i guess it's a case of if she can't have him, nobody can. (She's so funny, though isn't she? "How do i get home? The bus??" well you should have thought of that! she never does!) Nick knows damn well he's second best. He really did the right thing, as hard as it was. He should have known better all along and probably did if he'd admit it to himself.

Leanne started necking brandy and it was handbags at 20 paces in the back room with her and Eva. Eva really burned a few bridges and got a slap and an eject seat for her trouble. She called Nick, hoping against hope. Voice mail. And what was Nick doing?

Gahhhhh!!!! Why do they always do it on soaps. Why do they always ALWAYS shag the absolutely worst person possible trying to make themselves feel better? Nick and Kylie!!! It's one thing to go and keep Nick company and confess that she knew some of Eva's scheming and apologizing. Champagne did the job that red wine usually does. Soap Law is most definitely going to come into play here,  you just mark my words. Kylie will get pregnant by Nick. 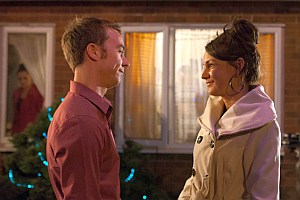 And on Boxing day, the dust settles and the secrets and lies begin and a few truths are blown out of the water.

Kylie knows she's done the wrong thing with Nick and they're both horrified rather than all loved up. David is determined to fight for her and thinks he's blown it. Kylie overheard David from her hiding spot in the loo and realized he was telling the truth so between that and Nick's encouragement, she's going to give him another chance. When there was a phone call from the hotel about a missing earring, i sighed. Dear heavens they aren't dragging that old plotline device out again? Apparently so. Nick tries to blow it off as a bar pickup but it's thrown Kylie so she's now making secret plans to leave, unable to handle the guilt.

David has no clue about what Kylie's planning, obviously. I wonder if they "made up" in bed that night though. I guess they'll have to if there's going to be a who's the daddy story because there will be. Someone shagging the wrong person is bound to get up the duff. Kylie wouldn't even talk to David, she left him a note but Gail caught her and ran for David. He wasn't able to talk her into staying and Lloyd drove her away. The letter didn't reveal anything about the fling, just that she thinks he's better off without her. Nick feels too guilty to talk much sense to David but Kylie just couldn't get on that plane.

By New Year's Eve, David and Kylie are all loved up. For now. Nice that he admitted that he hasn't really supported her like he should have. But Gail certainly put the damper on it by mentioning the N-word. Nick has a face like a wet weekend, as you would and I don't imagine he's all that excited to celebrate a birthday today. Gail is planning a surprise because she reckons he may even have forgotten. You mean to tell me she didn't wish him a Happy Birthday the minute she saw him this morning? What does she do? make a big show of it and embarassing him. So much for being a thoughtful mum.

Elsewhere Peter and Nick are glaring at each other, Nick and Leanne had it out on the cobbles and Nick outed Eva's scheming. Sod the both of you. Eva's unrepentant too. She pretends it was best for Leanne because she really loves Peter. Leanne knows better and now she knows the whole truth. Can't blame Nick for being bitter to Leanne. There's a chill in the betting shop and the cold air is coming from Leanne. But really, even though Peter did encourage her feelings, it was her decision to give him the last call on her affections before the wedding and her decision to try to marry Nick as a consolation leaving the door wide open for Eva to blow it out of the water. She kind of shot herself in the foot really and Now she's trying to suck back up to Nick while Leanne is about to do the same thing, with a birthday gift for Nick.

Fiz is happy and Kirsty is cooking a turkey the size of a planet for the two of them but she burned it under the grill by mistake. The Windass Christmas looked fun. Fiz and Tyrone are sneaking around trying to see each other. Now Tyrone is fixing Fiz's boiler and nearly gets caught by Chesney. Fiz is feeling like crap as are Chesney and Katy. That's not good, right after the gas boiler was fixed? Everyone talked her into staying home which is the last place she should have been. Next lie is another Connie lie, Tyrone to fix her car on Monday. 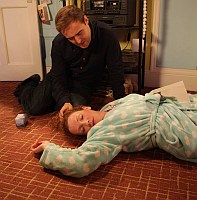 A few days further on, Fiz is really suffering ill effects. If she's renting the house from the council, why didn't she just call them to fix it instead of getting Tyrone to do it? Or at least ask Owen! I thought she collapsed before she hung up but perhaps not because Ty didn't seem at first to panic. Meanwhile Kirsty is looking forward to seeing in the New Year with Tyrone. She got off work early and nearly caught Ty calling Fiz to find out what happened. He couldn't get to check on her for a good 4 or 5 hours later. (Tyrone's keeping his new phone in an empty paint can in the back yard. Take note of that.)

Rob's not too happy to see Carla back, though. She's back for good and isn't selling up after all. Now he's got to scramble so that Carla doesn't find him out. Rob is busy trying to cover his tracks but Carla showed up. She's suspicious already and he keeps trying to keep her off the subject of the factory. The factory workers let slip that they've been really busy and later that Rob wanted to buy the factory, which gives Carla even more cause to question the lower evaluation and Michelle looks plenty guilty herself. Rob is very good at lying and bluffing but Carla's radar is pinging and she's going to get to the bottom of it which scares Michelle.

Jenna and Sophie had a few sweet smiles for each other and Kevin thought he was in there with Jenna. A few beers and he tried to kiss her under the mistletoe. She knocked him back sharpish. Jenna told Sally and Sophie that Kevin tried to kiss her and it puts her in an awkward position and needs to recuse herself from Sophie's care. They gave Kevin hell for it. Rules are rules. Sophie took a tumble which gave everyone a scare.  Sophie's not having anything to do with Kevin who was an idiot of the first degree. Nothing changed there then. Sally begged and pleaded. anything for her little'un. Guess it worked. We can tell Sophie's got a crush on Jenna but Jenna seems pretty uncomfortable too and did she react the way she did for the same reason? Jenna is now trying to keep it strictly professional and Sophie doesn't understand why. Well Duh. Under most circumstances, she is doing the right thing.

The Barlow Christmas lunch was less than gourmet as usual. Too bad we didn't have Blanche there for the running commentary. Gail and Audrey are still not speaking I see. Does Carla still go by Mrs.? Kirk calls her Mrs. C. How did Kylie get back to the fancy wedding venue/hall? Bus? Taxi probably :) Oh yes and it's Nick's birthday, Gail thought he forgot. I wonder why, when she went to work first thing she didn't say Happy Birthday. Wouldn't any mother do that? Emily babysat for little Ruby on New Year's Eve, in her own house instead of in Number 9.

Marcus' mom and dad arrived and area all set to adopt Liam as grandson and Maria as daughter in law. They're thrilled to bits that Marcus seems to have "come around" to the other team. Marcus tried to talk to his parents for not really making an effort all these years until he'd been with a woman but maybe it goes both ways. Maybe he kept them at arms' length, too. They certainly seemed like they thought Marcus got the wrong end of the stick. Marcus seeing Dylan off has given Maria ideas. She doesn't seem opoposed to the idea at least.

Two things about that hotel where Nick was staying:
1. Even if the desk clerk agreed to take the mother and brother of a guest to his room to check on him, surely they would have phoned the room first.
2. When calling a former guest to let them know that property had been left behind, would they leave a message with the guest's mother to the effect that his female guest had left behind an earring? Wouldn't they just have asked to have him call them back?
Given the number of times these kinds of dodgy things happen with hotels, I'm not sure Corrie is doing the British tourism industry any favours.

Technically, Carla is Tony Gordon's widow but i'm not sure she ever took his name or if she did, obviously it would have been briefly. She should have just gone back to Donovan!

You're right. I forgot that she had been married to Tony. Perhaps she reverted to the Connor surname because that is how she is best known professionally?