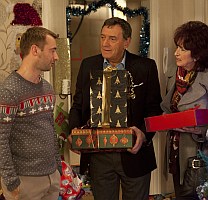 It's Christmas Day on Coronation Street and it's also Leanne and Nick's wedding day. Will the knot be tied? Meanwhile, Kylie and David seem to be unfixable. Where does it lead Kylie? Tyrone and Fiz pine and Marcus deals with his parents.

In the aftermath of events of Christmas day, Jenna tells tales, Fiz and Ty celebrate, Rob covers his tracks, Kylie makes plans. Carla is suspicious and Tyrone's attempts at a good deed may have fatal results.

For more detail and photos, see the Moosejaw Mercury at Corrie.net