'Tyrone is not my husband' says Lucy Jo Hudson 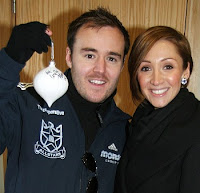 (This post was originally posted by me on the Coronation Street Blog in December 2012.)

What's On TV has an interview with Lucy Jo Hudson today. Lucy Jo is familiar to Corrie fans from her days as Katy Harris who met a sugary end after lashing out and killing her father, Tommy in the garage. Lucy Jo is also married to Alan Halsall who we also know as Tyrone Dobbs.

Lucy Jo has just finished a successful run on ITV's Wild at Heart. In this interview, she says she doesn't connect the character of Tyrone to her husband Alan because the two are very different.

"But I don't see Tyrone as my husband, he's much quieter than Al who's really in your face and very funny. I think the storyline is really good, they're doing a brilliant job. Natalie is amazing at playing a psycho."

But she thinks Alan and co-star Natalie Gumede are doing a bang up job (pardon the pun).

Lucy Jo also talks about her own career, and how she found it difficult to handle the fame when she was on Coronation Street as a young 17 year old actor. Acting was never something she'd considered previously but has grown to love it.