When was Corrie's golden age for you? 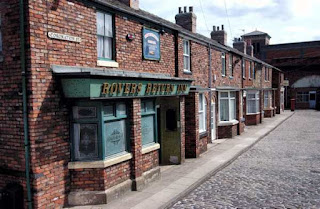 (This post was originally posted by llifon on the Coronation Street Blog in January 2013.) Blwyddyn Newydd Dda i chi gyd! (Happy New Year to you all!)

Today marks a year since I joined the Coronation Street Blog team, and my, how quickly that year went by!

To mark my first anniversary and to get a discussion going at the beginning of 2013, I'd like to ask you this question: When was Corrie's golden age?

When you watch Corrie now, do you say to yourself:  'it's not like it used to be' and do you hark back to the bygone days?

When were those for you?

The black and white 1960s when Ena, Minnie and Martha reigned supreme in the snug and when Emily was simply Miss Nugent? Or the 1970s that were bookended with strikes? Maybe you're partial to the 1980s with the Ken/Mike/Deirdre triangle and Alan Bradley's reign of terror? Perhaps the 1990s with Raquel, Reg Holdsworth and the Wiltons? Or the 2000s with Hillmania? Or is it a golden age now?

Or perhaps it's not a whole decade - maybe it's just only a couple of years?

Personally, I got into Corrie in 2002 and enjoyed the period between 2002 and 2006. And looking at old episodes I'd say the period between 1977 and 1989 was very strong: iconic characters, strong storylines and that wonderful mix of drama and comedy that makes Corrie so different to other soaps. Although it was a time of great change for the programme behind the scenes, it was also a time of stability on the cobbles: Alf was at the Corner Shop, Rita and Mavis at the Kabin, Mike at the factory and Annie Walker and then Bet Lynch at the Rovers.

So, when was Corrie's golden age for you?

My fave's aren't so much years but characters- although many of them were on during the same time period. 'ilda, Stan and her 'muriel',Derek and Mavis,Jack and Vera,Fred Elliot,Reg,Bet, Cilla and Les, Curly and Raquel, Eddie Yates to name a few. Still great actors/chacters now.