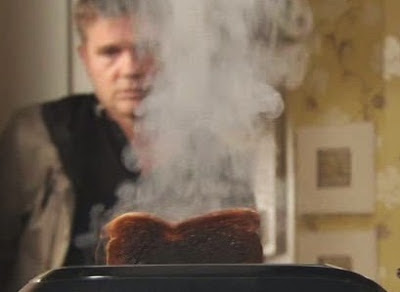 Hard worker award: Beth and Kirk are both "grafters" but neither one could get up off the chair to get a bag of crisps.

Hard A$$ award: Kevin. He has no right putting in a complaint. Sophie is of legal age isn't she?

Rites of Manhood award: Nick finally grew a pair and told his mother to go pound sand if she couldn't accept Leanne.

Ivy Tilsley award: Gail peeking out through the nets gave me shivers.

Deja Vu award: Nick told Kylie she'll have to have an abortion. There isn't even a sure chance it's his. At least the dna is similar.

Make him sweat award: Kylie wouldn't give an inch to Nick who was frantic to make the pregnancy go away.

Fashion shout: White weddings have been bad luck for Leanne, go for the scarlet woman look in blood red! (and a summer dress, to boot!) but then, red is lucky for Chinese weddings, after all!

Lines of the week:
Roy "If you refering to my objection to being a puppet in the Hayley and Mary show..." and "The woman is an intractable tyrant... whose scandalous reference to my Soggy Bottom vol-au-vents was an insult too far"
Dev about Karl "Your partner, your lover, your... drain on your resources?"
Gail had lots of them this week:
"She's a Battersby. Always has been. Always will be"
"I think i got through to Nick" (as Nick was talking to Leanne in the pub)
"You deserve better, and better's not hard to find"
"Most men aren't interested in a woman's foundations, Lewis"
"I'm not just a pretty face" (you can say that again)
"David? The voice of reason? Now we *are* in trouble"
"It's not every day your mother threatens to knock you over and sit on you"
Stella "You took my toast for granted"
Eva "It's your funeral.... sorry! Wedding!" (hahahahaha!)
Kylie "Love's blind" Gail "Have to be deaf and all, mouth on her!"
Roy "Mother was once told that she was an Empress in a former life. It's a notion she's struggled to dismiss"
Mandy "Jenn's not even gay for heavens' sake!" (Phrase of Doom, anyone?)
Mary "I've ruined the wedding" Lewis "Have you slept with the groom?" (No, that was Kylie's misfortune)
Lewis "Cruel to be kind. Time to cut those apron strings" (haven't we been saying that for years?)
Mary to Roy "We mustn't let a French tart come between us!" (Marscapone, that's Italian isn't it?)
Karl to Sunita "I'd rather be hated by her than loved by you!" (Ouch!)
Hayley to Roy "No one ever choked to death swallowing his pride, you know."
Kirk "I get this all the time, people wanting to pick me brains"
Lloyd "I'm sure this will straighten itself out. No pun intended." 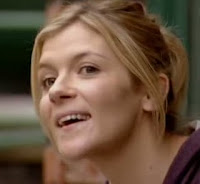 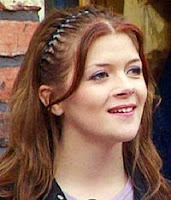 Was that a shout to Leanne's past? She looked very like she did in 1997 when she first married Nick.