Who should be the Corrie poster girl in 2013? 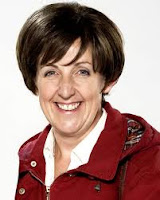 (This post was originally posted by Graeme N on the Coronation Street Blog in December 2012.)

Us Corrie fans are always moaning on about which characters get too much screen time and which we feel like we never see. Looking back there is a clear pattern in recent years of certain characters hogging the limelight and appearing never to take a holiday - dare I mention Becky, Tina or Sean??

What normally happens is a character or actor will be so prominent they soon burn out and leave (Becky) or drift into the infamous Corrie cupboard (Sean). For me at the moment Tina McIntyre is in danger of burning out. She has been fairly prominent since first arriving on the Street five years ago and seems to be constantly to the fore. There doesn't seem to be the same rotation of cast members as in the old days and even then if Elsie Tanner or Bet Lynch tended to dominate, we never seemed to mind as much. Funny that!

So my question is, who do we think will be the Corrie poster girl for 2013? I say poster girl as I do believe the female characters dominate the show, and rightly so. Here is my shortlist of potential candidates for further discussion:

1. Tina McIntyre - We may as well get her out of the way immediately. I have a horrible feeling we may be seeing another full-on year for Tina as the surrogacy story drags on and probably peters out. Do we think this storyline may prove one step too far for our T?

2. Sophie Webster - We haven't seen that much of the Street's resident Christian lesbian of late. I had expected more of the Sophie/Ryan story than we actually got, but I shouldn't really complain as what we did get was extremely tedious. With a possible new romance on the boil (unless Kevin gets in the way - double eww) it would look like Sophie is coming back to centre stage. Sian who?

3. Kylie Platt - Now I love Kylie. She has really grown on me. And as I've said before I prefer Kylie to her sister, Becky. Kylie has been on the back burner a bit of late but her recent troubles with David and fling with Nick are set to bubble on and explode in the New Year. While I'm all for Paula Lane coming to prominence, I can't help but wish they had come up with a more original plot for her to act out. 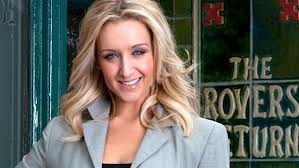 4. Eva Price - I'm undecided on Eva. I know she has her fans amongst both blog followers and contributors but for me she is still a bit of a caricature and I just can't abide her spoilt nature. And I would never go so far as to compare her with the lovely, much-missed Raquel. There is no comparison! To be fair though, she is far superior to her on-screen mother, St Ella, who will hopefully be quickly forgotten when she departs in 2013 (fingers crossed!)

5. Hayley Cropper - I know she is a bit at odds with the others mentioned here, but Hayley does sum up Coronation Street for me and I just adore her. I would love Hayley to feature in a prominent story when Julie Hesmondhalgh returns from leave. It feels like ages since Roy and Hayley have had a big meaty storyline. I would love the Croppers, and Hayley in particular, to shine in 2013.

So that's my shortlist of possibles. What do you all think? Who would you like to see come to prominence next year? Anyone I've not included on this list? Are you crying out for more from Izzy, Katy or Fiz? Or what about Julie? Let's have your thoughts!