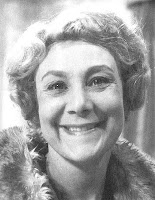 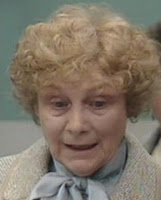 Betty Alberge played the role of Corner shop proprietor Florrie Lindley between 1960 and 1965.

Born in Manchester in 1922, Alberge entered the acting world while in school, starring alongside her schoolmate Pat Phoenix (Elsie Tanner). She then trained at the Manchester Repertory School of Acting and began her professional career at the Colwyn Bay Repertory Company in North Wales. She worked in various TV programmes on both the BBC and ITV and made her TV debut in the ITV Play of the Week in 1958.

Two years later she joined the cast of new drama serial Coronation Street. She initially auditioned for the role of Ida Barlow but Corrie creator Tony Warren felt she was better suited to the role of a shopkeeper. Thus the character of 38 year old Florrie Lindley was created specifically for Betty. Betty appeared in the very first scene of Corrie alongside Maudie Edwards (Elsie Lappin) when Florrie Lindley became the new owner of the Corner Shop and was shown around the place by retiring owner Elsie. Her position as a new resident on the street provided the opportunity for Tony Warren to introduce characters and the street itself through Florrie’s eyes. During her time on the cobbles, Florrie’s storylines included dating Frank Barlow; being mugged; falling for Harry Hewitt; opening a sub post office in the shop; and suffering a nervous breakdown; and dating Tickler Murphy. In 1964, Alberge fell victim to new producer Tim Aspinall’s axe. Florrie was written out when her estranged husband Norman (Florrie had always claimed she was widowed) turned up and wanted to reconcile. While she considered his offer, Norman went on to have a fling with her best friend Elsie Tanner. But Florrie decided to reunite with Norman and they immigrated to Canada together and sold the shop to Lionel Petty. Florrie was the last character of Aspinall’s bloodbath to depart, leaving in June 1965. Overall, Betty Alberge appeared in 311 episodes between 1960 and 1965.

She was married to Rupert until her death. They had a daughter Christine.


Did you ever see or meet Betty Alberge? Do you have any pieces of trivia about her?


Research from IMDB and Corrie Net.