Is Rob finally finding his feet? 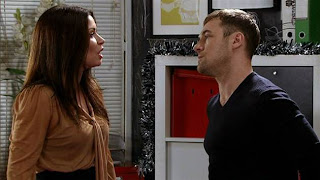 (This post was originally posted by Chewy on the Coronation Street Blog in January 2013.)

Ever since Rob first turned up on the street, he has seemed like a bit of a spare part. He's basically been playing Luke Strong, which felt like one of the biggest letdowns of his character.

When I first heard that Carla's brother was joining the show, I was excited, we were finally going to see another side to Carla, but then came the news that Carla and Peter were leaving for six months.

This left Rob at a bit of a dead end, the most interesting part of his character is that he is Carla's brother. When Carla returned this Christmas, we finally started seeing their sibling rivalry crop up, I'm just hoping his relationship with Tracy doesn't drag his character back down again.