An affair to remember (but we wish we could forget) 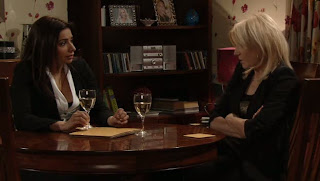 For weeks now we've been suffering this Karlita affair. It's out of character for her and the sleaze factor is rising (or should that be dropping) rapidly.

This week sees the penny dropping for Dev and his radar is up. He may have got the wrong idea when he found the cash but he's on the right road.

Watching Sunita grasping for straws and trying to bluff her way out of his accusations brought a few bad memories back for me. The affair might be so wrong for these characters and Corrie but I have to admit there's a very real element of honesty in it. Affairs really are like that. Sleazy, full of lies and cover ups.

Read more about it over here.