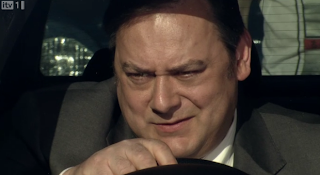 When Terry first arrived back on the street, I thought he was going to be the troublemaker, who causes problems for everyone else. It turns out I was right.

Though, I find myself rooting more for Terry and Tommy than for the rest of the street, sure Terry has done some ducking and diving to get the planning permission, but what has he done wrong?

At the end of Monday's episode I felt sorry for Terry, Tyrone had cut off his only way out of trouble simply through spite, Terry might not be perfect, but he's not pure evil either, he seems to be the sort of villain I really like, the rogue, who might have bad motives, but in the long run, they're still human.

It's a shame Terry is only back for a short stint because he's the sort of character that I think Corrie would do well with keeping.