Last week's Corrie had everything good 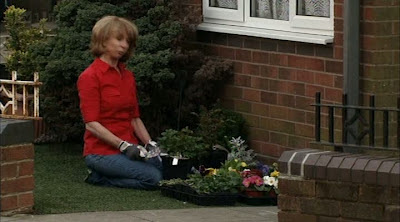 (This post was originally posted by me on the Coronation Street Blog in May 2012.)

In spite of some of the "Twilight Zone" elements in Corrie last week, there was an awful lot of good, too.

Drama, danger, and a little touch of a smile just for good measure, like that spoonful of sugar, you know?

We had Terry Duckworth in a panic because his bent councillor got caught out and he said his club was down the pipes, complete with thugs roughing over he and Tommy. Terry was almost believable, too, until that little smirk over Tommy's shoulder at the end when he "reluctantly" accepted Tommy's offer of cash. Anyone else think the next call he made after he called Tommy was to the sharks? Me too.

Julie and Brian are facing a health crisis. Julie is not only facing the possibility of never have children but has to fear that a growth could be something more serious. I'm not sure which was upsetting her more but the scenes were very good. Doctor Matt tried to be reassuring but knowing it could go either way. Brian, for once, being serious and supportive rather than making a foot-in-mouth comment. Eileen and all the other factory friends, shocked and concerned. We all hope Julie will be just fine. (We all assume Brian has already had that vasectomy reversed like he said he'd do, or have they forgotten about that already?)

Elsewhere, Kirsty and Tyrone were triumphant. They managed to get the bent councillor in trouble and it looked like the campaign to thwart the lap dancing club was won. But Kirsty got suspended and Tyrone, thinking he was helping, found her a temporary job "stuffing knickers into boxes" which appalled Kirsty. Her impulsiveness has got her in trouble again and if she does keep her job after the investigation, she'll probably only ever be a desk cop. She and Officer Hooch can commiserate in the canteen over bad coffee.

She got herself so overwrought that she lashed out, blaming Tyrone, and whacked him with a metal soup ladle!! Even though I knew it was coming, it was still shocking! Natalie Gumede really knocked it out of the park. Excellent performances by both she and Alan Halsall!

When I first heard that Kevin might give Jack to Pam and Bill so that he could keep Sally, well, the insults Pam hurled at him were compliments compared to my opinion of Kevin Flamin' Webster. But in the end, Kevin did the right thing. He couldn't give up Jack even knowing Sally wouldn't have him back because of it. I hope Sally doesn't take Kevin back in the end. They both need to find something and someone new in their lives rather than going around the same old same old all the time. I would have liked Sally to remind Kevin that if the situation was reversed, his feelings towards a child she had from an affair would probably be no different.

And a little bit of everyday life, with Gail replanting her blooms and Mary bullying Norris. Life goes on.

By 'eck it were good!

I couldn’t help but notice an amusing follow up to our Desperate Housewives Meets Coronation Street feature in last night’s episode.

Bree Van De Kamp and Gail McIntyre, anyone? They’ve both been widowed, had murderous partners, and have questionable relationships with their children after all!

Be sure to check out Coronation Street Blog's Desperate Housewives edition of Weatherfield Style, and other instalments, here.

I'm still unclear if Terry set up the first loan shark payoff in his apartment. I thought he did as evidenced by his smirk...but I also though that the two henchmen in the club were the same two that showed up on his doorstep. Terry knows Tommy doesn't have anymore money so I don't see why he would pull the same stunt again....I'm starting to think it was all legit last time.