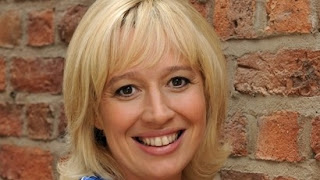 (This post was originally posted by Ruth Owen Varley on the Coronation Street Blog in April 2012.)

How terribly sad for Julie that the twelve week scan she was so excited about, not only revealed that there was no baby, but that the poor woman has a growth on her ovary. In fact, the whole experience must have been totally devastating. If ever there was a woman who was excited about having a baby and becoming a mother it was Julie.This was clearly demonstrated when she arrived at the ante-natal clinic as she burbled on about her partner and how important he was. The receptionist could have been more sympathetic after asking Julie to take a seat. Admittedly, Julie did ramble on a bit but the receptionist could have shown more kindness - just a few 'I knows' would have been sufficient and would have shown a little compassion and understanding.

Brian's ex-pupil Georgina Rose, despite having left school with no qualifications (though she did go to college)  handled the scan situation quite well, saying that the baby was probably hiding. Julie is no fool though, and suspected that something was wrong almost immediately.

Later, in the Rovers, drinking brandy, Julie feels that she is the victim of a 'cruel hoax' and that she must have done 'something awful' in a previous life.The distraught woman talks of her 'toxic womb' and has moved from elation to despair. You would have to have a heart of stone not to feel sympathy for Julie.

A brief mention now for the baby-sitter from hell, no other than Mary.You know it's not going to go well when Mary, as soon as Anna has gone to work at Dev's, announces, 'Right! House rules!' Then states, 'Defy me and you'll be straight up those stairs.' It will be interesting to hear what the differing accounts of the evening will be when Mary and Faye relate their version of events to cash-strapped Anna.