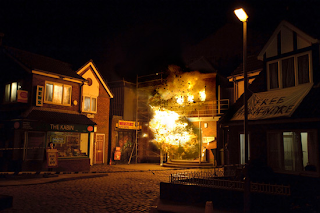 So this week was Corrie's fourth big week since they started back in 2010, each of the weeks have had the conclusion of a big storyline, but does this harm the show?

For siege week back in 2010, it was the payoff to quite a long running storyline that had began back in 2008, so this was the only week that actually felt as if it suited a big week.

In the end the week ended up being derailed by the Cumbria shootings, which ended up making the finale feel a bit empty. The next time such a week was attempted was last year, the conclusion to John Stape's storyline.

While this big week was good, it didn't pack the same punch, by the time we got around to the next one, the format started to feel very tired, the big storyline we were treated to was a drunken Carla crashing into the Bookies, while this would have worked well in the usual schedule, it was hardly worth the big week.

This weeks episodes don't even feel as if the writers tried to make it special, for this reason I am actually happy, Corrie shouldn't have to put on a big show when ITV comes calling about the Britain's Got Talent finale, especially these days when Britain's Got Talent is no longer a ratings powerhouse.

I hope this means Corrie will finally stop being moved to make way for a Simon Cowell show, Corrie is one of ITV's most important shows, and it shouldn't be thrown around the schedule for a 1 minute wonder like Red & Black or Britain's Got Talent.