It's a small, small (Weatherfield) world

(This post was originally posted by Clinkers (David) on the Coronation Street Blog in April 2012.)

As a stalwart fan of everything Corrie, I can roll with some of the punches dealt out by the soap. I have a coping mechanism which allows me to deal with dull characters, unconvincing accents and tedious plot devices. But enough of Tracy Barlow. However, what really has me lobbing my hot pot against the cludgy wall is the physical space on't Street. Or lack thereof. 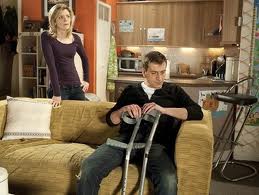 I have a fear that I may have already droned on and on (and on) about Peter Barlow's flat. A more nastier living space you could not imagine. Most visitors seem to edge through the door sideways before having to come to terms with that grotty little dining table. I say 'table' when what I actually mean is 'dinner plate on sticks'. The 'kitchenette for one' is also pretty rank but, I suppose, large enough to accomodate a rack of red wine and a goldfish bowl sized glass.

The Alahan's home is also a shocker. It's almost as though Dev & Sunita went mad in Harveys and decided to cram as much dowdy furniture into as small a space as possible. What with Sunita's baps and Dev's growing girth, it can only be a matter of time before one of the twins is found crushed. 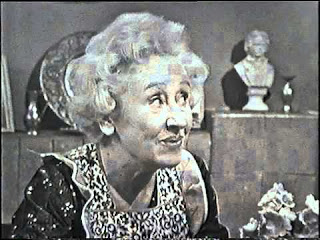 The Rovers, as we all know, existed in some kind of architectual parallel universe for several decades. Annie Walker lorded it over two bars, a function room, a splendid ballroom, a small ampitheatre and a circus big top. Meanwhile customers were expected to crash through a solid brick wall and urinate in Albert Tatlock's kitchen. No wonder he looked so grumpy.

Last week we were party to several scenes involving Sally and the pram. She wheeled the devil's spawn (sorry but that child looks menacing) into the Kabin and managed to fill the entire shop. For a few minutes the place was half Rita-half pram. This though was not enough for the child-loathing Mrs Webster. She crashed over the cobbles in search of somewhere even smaller. Sally battered her way into Roy's Rolls with the offending buggy and jammed herself into a corner with mother of the year Fiz. There was no sign of Sylvia and I can only imagine that the old dear was pinned up against a table somehwere or was splattered under the wheels of Sally's Mothercare/Sherman tank hybrid. It's all a bit mad. What with all of this plus the ever-expanding upstairs at the Rovers together with the world's smallest bistro (watch with glee as Wooden Spoon in a Wig Eva stumbles into tables with a plate of liver-au-poivre), I'm starting to realise that Weatherfield is unlikely to ever feature on "Location Location".