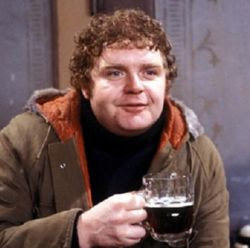 With great sadness, one has to announce the death of a true Corrie great - Geoffrey Hughes. Between 1974 and 1983 and in 1987, he played the loveable ex-con and binman Eddie Yeats. He passed away of prostate cancer. He had been living on the Isle of Wight.
Eddie is best remembered for his Scouse accent, his wonderful chuckle and for being Stan and Hilda's lodger in the early 1980s. A Rovers regular, he was responsible for installing the famous 'muriel' at the Ogdens' house and was involved in many schemes over the years - conning the residents on numerous occassions by selling dodgy carpets, watches and paintings. He was an unlikely friend and confidante to Bet Lynch and worked for a time as a labourer for Len Fairclough. Eddie left the street in 1983 with new wife Marion and their daughter Dawn was born in 1984. He did return briefly to visit Hilda in hospital in 1987 as Geoffrey Hughes wanted one last chance to act alongside Jean Alexander who was leaving the show. 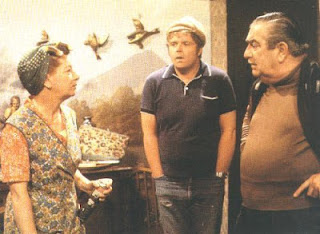 As well as his role as Eddie, Geoffrey Hughes is also known for playing Onslow in  Keeping Up Appearances, Twiggy in The Royle Family and Vernon Scripps in Heartbeat.
Thank you Geoffrey for creating such a brilliant character and rest in peace.

The BBC have a tribute to Geoffrey Hughes here.


Do you have any memories of Geoffrey? Did you ever meet him? Leave your comments and tributes below.