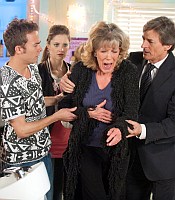 Tonight on Coronation Street, another confrontation in the War of the Salon resulted in Audrey's collapse from a heart attack.

Sue Nicholls took lots of advice and research to try to portray it accurately, though she still had to add a bit of drama for it for the telly.

On the official Corrie ITV site, Sue says she hopes she's found a good balance between reality and drama, trying not to do the "Hollywood" thing, clutching her chest.

Heart attacks don't always feel like that, especially not in women. We've already seen Audrey deal with high blood pressure with one power walk and about two days off the booze but the stress of the salon conflict with David doesn't seem to have done her any good at all.

See what the British Heart Foundation have to say on Audrey's heart attack here.