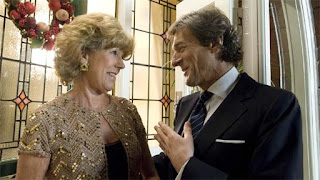 (This post was originally posted by David on the Coronation Street Blog in April 2012.)

While reading this article on The Sun’s website about Nigel Havers signing up to appear in panto this year, it got me thinking about his character Lewis. The article mentions that his romance with Audrey has been a hit with viewers, yet I haven’t really seen that much of a reaction either way to them as a couple.

Do we like them together? Do we believe that Lewis has changed? I personally am not keen on their relationship. I love Audrey on her own and I think the men they set her up with lately do nothing for her. Furthermore, I don’t like how Lewis has been playing the innocent when it comes to the salon. Keeping score and winding David up is hardly going to make things easier for Audrey is it?
If their relationship is doomed (for lack of a better word) then I hope that another return for Lewis is not on the cards because even if he has changed (which I don’t really think he has) I think that Audrey needs a bit of time on her own again. After the whole ordeal with Marc/Marcia I’m surprised she even wanted another relationship so soon!
Follow the Bluenose CorrieBlog on Twitter and Facebook
Posted by Tvor at 11:47