Some thoughts on last night's Corrie 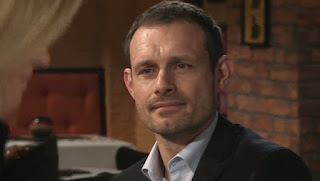 (This post was originally posted on the Coronation Street Blog in June 2012, reposted to this blog with permission.)

Leanne always seems to end up back at Nick's door. Nick still has that soft spot for her and he wants to be her friend and confidant. He'd take her back in a minute and if she's been knocked back yet again, she could end up back in his arms, too. You can still see that longing in his eyes, can't you?

It can't have been the weekend, Dev picked up the kids from school. But Rick and his thugs managed to stomp all over the garage and beat the crap out of Tommy. Where was Tyrone? Kevin? And all that screaming out of Tina, did nobody hear it through the wall of the Kabin or from outside that thin metal door?

Someone please put an end to this appalling Karl and Stella thing. Please. Or at least let Dev get a clue.

It looks like Kirsty's actually making friends and fitting in with the girls in the factory. I like that she stood up to Carla and encouraged the strike on Eileen's behalf. Carla might just have met her match if she doesn't sack Kirsty first. But it had better be for a good reason or Kirsty will have her up in front of a tribunal. I don't understand why nobody else has in the past, not just Carla but many of the Underworld bosses have sacked folk for very little reason. One or two have threated action but most have always got their jobs back but it's a very real concern. You don't even hear most of the sackees threaten it as a rule.

Missing persons/characters in the cupboard:

Does Hayley still work in the factory? If they were a machinist down, where was she?
Where's Sylvia?
Chesney and Katy and the baby?
Things seem quite on the Salon front. Is all forgiven?

Re: strikes at the factory. If my memory serves, back in the days when Mike Baldwin owned that factory, Ivy and Vera and Ida (Clough) et al were always threatening a "job action", or to take Mike to the tribunal, for sacking someone, or for some unfair treatment. I too was surprised and pleased to see Kirsty get the ladies up in arms and doing something! And it's a pleasant change from the clichéd soap opera stuff they're throwing at us these days, affairs, addictions, violence etc.
fondue123