The Rovers Return according to Daran Little 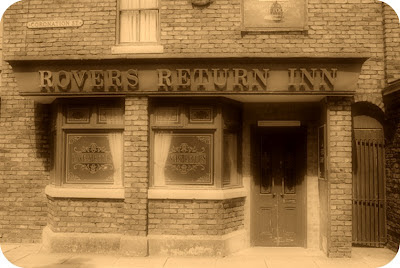 One of our regular readers/commenters, "Dolly Tubb" sent in this information on the Rovers Return yesterday. She is kindly allowing us to publish what she has written. Her information is gleaned from one of Daran Little's books, Coronation Street: Around the Houses, published in 1997.

Daran was the show's archivist for many years and later, one of the writers. His many books on Coronation Street and the show's history are considered by fans to be the Bibles. Around the Houses has the history of Weatherfield's famous street and houses from it's construction in 1902 to 1997, where the pre-1960 details are either taken from memories spoken on screen by characters or invented by himself. It's a great read and if you should find a copy, it's well worth reading.

With that, here's the information Dolly put together from that book:


I have been intrigued by the Betty/Rovers/Annie Walker’s Will story.  I have written a bit below about the history of the Rovers since the Walkers to try and clarify things a bit after recent events (!) – I was going to put it in a blog post comment (Betty does not own the Rovers Return) but it might be a bit too big – what do you think?  It is taken from Daran Little’s ‘Around The Houses’, published by Granada in 1997 so I think it will be spot on!  It suggests that the Rovers was only sold by the brewery in 1994, to the Duckworths.  Annie Walker therefore never had anything of the Rovers to leave to anyone, although she did insist that Billy took over as the manager after she retired.
Regards
Dolly Tubb
The Rovers Return was one of several  hostelries in the area, including the Flying Horse, owned by local brewery Newton and Ridley.  Originally to be called the Queen Victoria, following the ‘Old Queen’s’  death in 1901 the pub was renamed the Rovers Return Inn instead.  It had 4 bedrooms (one was needed for paying guests for the Rovers to be considered an Inn) and a laundry room which was later converted into a bathroom.  The Rovers Return opened its doors on 16th August 1902.
Jack and Annie Walker moved in to the Rovers in 1938.  There were quite a few lodgers in the course of their tenancy, including Emily (Nugent) in 1968.  Jack died of a heart attack in 1970 and Annie stayed on as manager, appointing Betty Turpin as head barmaid, and Bet Lynch as assistant barmaid.
In October 1983 Annie retired from the Rovers to go and live with Joan in Derby, and the pub was taken over by her son Billy Walker as a condition of Annie paying off his gambling debts of £6000.  Billy’s reign as manager wasn’t too successful and he left to go back to Jersey, leaving the managership open for grabs.  Betty Turpin urged Bet Lynch to apply for it, and to their delight Bet Lynch became manager of the Rovers Return.
In 1986 the Rovers burned down as a result of Jack Duckworth trying to mend a fuse, but the pub was rebuilt and given a nice new modern look by the brewery.  Delighted with the new look Rovers, Bet tried to buy the licence from the brewery, but was overwhelmed by the size of the repayments and fled to Torremolinos.
Alec Gilroy’s name was put over the door of the Rovers, helped by Betty Turpin and Gloria Todd, and after Bet and Alec married in 1987 Alec ‘gave’ bet the Rovers by putting her name over the door instead.
When Alec left Weatherfield in 1992, Bet remained as manager of the Rovers.  In 1994 Bet heard that the Rovers was up for sale by the brewery and she could have it for £66,000.  With no money of her own, Bet approached Rita for a loan.  Rita briefly considered a partnership with Bet but backed out when she realised Bet had neither money nor business sense either, and turned Bet down.
Consequently, the Rovers went under the hammer and was bought by Jack and Vera Duckworth, the first in a line of outright owners of the Rovers Return.