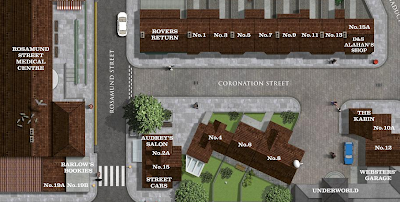 (This post was originally posted by Chewy on the Coronation Street Blog in June 2012, reposted with permission.)

Eagle-eyed Corrie fans over at TV Forum have stumbled on an up to date official interactive map for Coronation Street and the surrounding areas..

You can zoom into the map and find out who lives where, you can also click certain things on the map such as the postbox and people on the street to get trivia and history on the show.

There's also little videos in some sections titled "Corrie Gold" which show classic scenes that took place near or inside that building, for example, the Butchers has a clip showing Ashley and Claire getting together.

Not only is it useful, but it looks really nice and detailed too, down to all the little road markings and props that you can see during the show, go check it out!