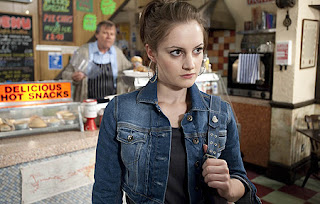 (This post was originally posted by Clinkers (David) on the Coronation Street Blog May 2012, reposted to this blog with permission.)

Go on then - who's your Corrie guilty pleasure? For me it's the hapless slapper Kylie Platt, perennial rough diamond and dodgy mother. With something bordering on relief I welcomed her back to our screens this week. Unlike some other Street residents, and courtesy of the wonderful Paula Lane, Kylie has numerous sides. They usually seem to compete for prominence - drunken Kylie, angry Kylie, repentent Kylie - but who cares when you have an actress as watchable as Paula. Although I love a nice bit of character development, I would be quite happy to see Kylie lurch from one disaster to another. Her over reactions are marvellous and I bet we still have a few more chances to see her slam her way out of Gail-in-Bloom's front door.

It should have been a joyful week on the cobbles. In an ideal world, the regulars would have been collecting for Tina's wreath. Stella would have left a sherry glass on the bar of the Rovers so that her friends (who are they exactly?) could leave a very small donation. They would have gathered in sad recollection, recalling the lack of fun times they had with her. After the funeral, a wistful Stella would have jammed a passport-sized photo on the Rovers wall secured by a piece of chewing gum, the emotive phrase "Tina Hatchet-Face, Rover's Misery 2010-2012" scribbled underneath. 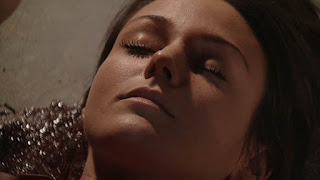 Anyway, this isn't an ideal world and so Tina returned to the joyless flat and her equally joyless boyfriend. Whatever happened to cheeky, fun-loving Tommy? In a word, Tina. Poor old Tommy is now a sulky drugs mule for bovine-faced Rick. At least if Tommy makes a few quid on the side, he can buy himself a t-shirt that doesn't threaten to reveal his man-cleavage at any moment.

Which brings us on to Sunita. This particular storyline staggers from bad to worse. The writers may as well have Sunita sat in the middle of the Corner Shop astride a giant banana, lowering her eyes and licking her lips. The trollopisation of Sunita is one of the most grisly character changes we have ever had to witness. It's horrid. The whole saga needs to be taken outside and shot. It would be the kindest thing to do. 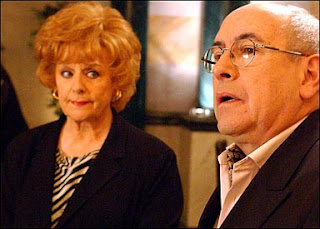 Three cheers this week though for the lovely Rita, octogenarian bride-to-be. She and Dennis got one over on snotty Norris and his camp nastiness. It's like having some evil Liberace serving sweets. Sean should take a good look at Mr Cole because that's what he'll be in twenty years time.

I'm still trying to work out the relevance of Eva Price. Her scenes seem to comprise of her stomping up and down the cobbles with that oversized handbag on the crook of her arm. What does she keep in there? Her personality? It is difficult to care about Eva and her wizened boyfriend, clattering around in the world's smallest bistro. Maybe we will warm to her eventually. And then again . . .

Oh, agreed, totally! Clinkers only missed the end of the Paul/Eileen/Leslie debacle. Watching the Sunday whole omnibus, I was ready to rip off all their heads (or send them to Cyprus for ever). I like Eileen, but she picks men like I pick winning lotteries - and I'm still working!
It's certainly time for a shake-up. TinTom can go anytime; Mary as well.
Very funny update!

Whatever happened to cheeky, fun-loving Tommy? In a word, Terry.