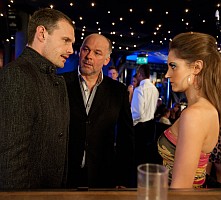 No coincidence award: Kylie's been missing for a few weeks, nobody knows where she is. Nick and David pick a random lapdancing club and there she is!

Short memory award: Tina says the flat has good memories. That would be the flat where she nearly killed herself by not eating, full of grief when her father died.

Third time unlucky award: First, Nick and Leanne's club didn't open because of Peter's drinking. Then the club was destroyed with the explosion and tram crash. If Terry had been successful and torched his club, right next to the Bistro, Nick's club likely would have gone up in flames AGAIN! 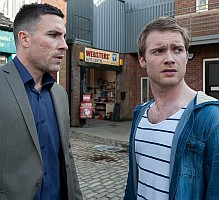 What's that got to do with the price of eggs? So Kirsty had an ex that cheated on her. How does that make you not get on with your new workmates?

Raise the price of your eggs award: Dev is moaning about the shop being in the red. Someone needs to point out that two holidays in a month isn't helping.

The mind boggles award: Kirk as an undercover cop. *snork*

Ingratitude award: Paul might be in shock but that's no reason to treat Eileen, the *other* love of his life, like dirt!


Lines of the Week:
Tina "Grow up Tommy, he's playing you like a fiddle and you still can't see it!"
David about the Bistro "Yeah, well, it's poncey, overpriced and fake, just like Eva," (whack!!!)
Terry "I've got mates" (no. really?)
Fiz to Kirsty "You're now riff raff like the rest of them!"
David "I didn't know you cared" Nick "Neither did I"
Sally "Gardening comes naturally to me as I'm native to Cheshire" (No, you're native to a few streets over)
Emily, after Audrey lets Mary buy her a drink "You said you couldn't be bought" Audrey "I can't. But I shall enjoy watching Norris try"
Tommy "He's a pathetic loan shark. I'm not scared of him" (You should be you thicko)
Sunita "If this is just an affair let's just enjoy it" (If? she's acting like it's more than that)
Kirk "Why is a table called a table?" (and more...)
Terry "Tyrone, anything you need, you just come see me (only if he needs a reconditioned pram with an accident record)
Paul accusing Eileen "Lesley, the love of my life, would still be alive" (Ouch, but he thanked her in the next minute)
David to Nick "When did you turn into me and I turn into you?"

Didn't Sally say something more like "Cheshire is my spiritual home"?
fondue123

Ah yes, that's indeed what it was