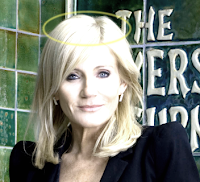 When Stella first arrived on Coronation Street, I gave her the benefit of the doubt, there were a lot of fans up in arms about her, a southerner playing a northerner, something that Tony Warren was against when he created the show.

As time went on she became a little more accepted. Then people started to dislike her for another reason, she started constantly inviting people "into the back room", to talk them through their problems.

The problem with these scenes is they feel terribly forced, I can see that Corrie are trying to make us like her, but they're trying too hard, Stella doesn't need to be some sort of guardian angel for the street, that is not what makes a good Coronation Street landlady. Look at Annie Walker, she had faults, she had delusions of grandeur. Look at Liz McDonald, she had dozens of faults, but these are what made her likeable.

If Corrie want to make us like Stella, they need to tone down on the guardian angel angle, in one of last week's episodes, she was shoehorned into Eileen's storyline for no apparent reason. A better character to use for those scenes would have been Steve McDonald, Eileen's old friend, not the landlady of the local pub.

Boy! I agree 100%. She needs to take care of her own garden rather than tending to the weeds of others. She egged Eva on to cause Nick maximum pain without advising this numbskull daughter to take the high road - get her facts straight, not air the dirty linen in public, etc.

I was just thinking the same thing last night. They are trying too hard to make us like her. I like her but there has been too much of her lately. Let her be more subtle.