Corrie's Maria: Who will her next "wrong" bloke be? 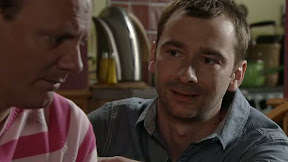 (This post was originally posted by me on the Coronation Street Blog in May 2012.)

Our Maria is a lovely girl but she's got a long history of falling for the wrong bloke. She had Tyrone but Fiz stole him away and when she got him back again, she wanted to change him. She was with Nick but he ignored her and took her for granted. Liam was in love with someone else and Tony was a murderer. What's a girl to do?

Recently, we've seen her become really good friends with Marcus who loves to help her with little Liam. I've been getting an idea where this is all leading so here's a bit of speculation:

Marcus really, really wants a family of his own. He really misses Dylan, Sean's son and seems to be spending more time with Maria and her little Liam. Maria is starting to date again and already has had one disaster under her Gucci belt. I'm starting to think they're setting this up for Maria to develop a crush on Marcus. I even wonder if Marcus may have mixed feelings about her, in light of the fact that he'd have a little family.

Sean is already showing signs of feeling left out of the loop when Marcus has been hanging out with Maria. I wonder if further tension between the two men could give Marcus some "wishful" thinking. I expect it to end quickly, though, with Marcus realizing it would never work and Maria realizing the same thing. Love with a gay best friend is doomed. I think it might be in the cards, though, for a short storyline at least. What say you?