Over on the Coronation Street blog, there was a countdown of the top 60 favourite characters as decided on by a number of polls. Here's the winner of the polls and there's a link at the bottom to see all the top 60 with a little write up on each. The full list is also here in this post below. Blogger Llifon did a lot of work on this!

Beating Blanche to the top spot by just one vote is Jack the lad.

Although he made his first appearance in 1979, Jack didn’t become a regular until 1983 when he bought No. 9 Coronation Street and until his death in 2010 he was a firm fixture on the cobbles.

Married to Vera for 50 years, Jack also had his fair share of flings, mainly with bored housewives. His biggest conquest was busty barmaid Bet Lynch, but that came to an end after Vera found out. Following Stan Ogden’s footsteps, layabout and bone idle Jack had many jobs that included window cleaner, lollypop man, cellar man and cab driver. Jack didn’t hide his contempt of his son Terry who used, lied and manipulated both him and Vera and Jack was sickened when Terry sold his son Tommy to his in-laws. The nation cheered when Jack punched him and disowned him.

Jack miraculously became landlord of the Rovers, 25 years after the last Jack ran the Rovers: Jack Walker. After going bankrupt, he sold the pub to Alec Gilroy and ran a B& B. Soon enough, Jack and Vera returned to N° 9. Jack’s main hobbies was supping in the Rovers and keeping pigeons, much to Vera’s annoyance.

In 2008, the Duckworths decided to leave the street and move to Blackpool. Sadly, Vera died before they made it. After her death, Jack led a quiet life, revolved around his surrogate son Tyrone Dobbs and his wife Molly and found companionship with fellow pigeon-lover Connie Rathbone. Jack was at his proudest in 2010 when Molly gave birth and called her son Jack. That year, Jack was diagnosed with incurable Non-Hodgkins lymphoma. He did good deeds to his neighbours and found out that baby Jack was Kevin Webster’s and not Tyrone’s. But he vowed not to tell Molly’s secret and passed away with the secret.
Does Jack deserve to be number one? Or does someone else deserve it? Were you a fan of Jack? Leave a comment!

HAVE A LOOK AT THE FULL TOP 60 COUNTDOWN HERE 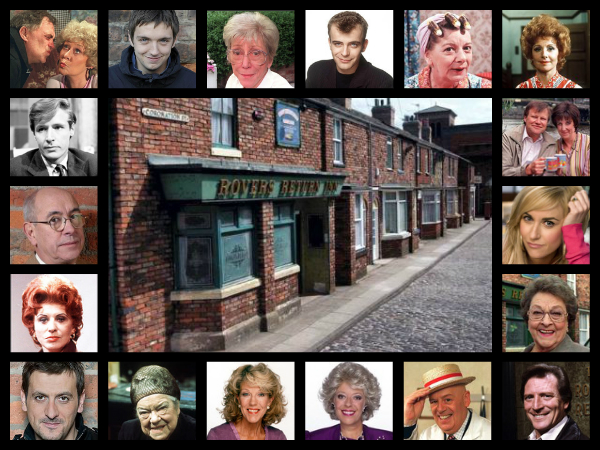 It's been a long process but we've finally reached number one in our quest to find the blog's favourite Corrie character. The first poll opened back in the bleak days of January and here we are in the equally bleak days of May having found your fav character - Jack Duckworth! Not a landslide victory but enough to crown him Corrie fans' favourite character!
Commenter AmandaB yesterday asked if I could put all the results of the countdown in a blog post and here they are with the votes in brackets:


The collage above includes the street surrounded by the top 20 Corrie characters and symbolises, I think, the cream of Corrie.
And so there we are! If you want to read character synopses of the top 60 then click here.
Did you enjoy the countdown? Were you shocked by some of the results? Did your fav characters get a justified ranking? Or were they robbed?
For me, I was shocked to see Annie Walker having just scraped entry into the top 30 whereas I would've put her in the top 20 or top 10. Although it's been nearly 30 years since she last appeared, through YouTube you can watch classic Corrie and Annie ruling the roost at the Rovers so I did think she'd have ranked higher. Then there's Vera, Elsie and Ena who I thought would've been in the top 10. On the other hand I was surprised to see Mike Baldwin ranked so high - I didn't think he was that popular. I was happy however that Rita made the top 5! But looking at the top 20 I think they represent both sides of Corrie - the drama and humour that makes it unique and makes the other soaps look in awe. Side by side with the dramas of Elsie, Ken, Mike, Peter and Becky, you've got the hilarious antics of Hilda, Norris and the Duckies and the fabulous one-liners of Blanche and Betty.
I hope you enjoyed the countdown as much as I did conducting the polls, collecting the results and writing all the rankings and who knows, maybe there'll be another countdown in the near future! Watch this space!