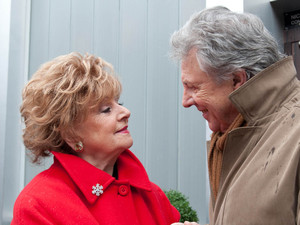 (This post was originally posted on the Coronation Street Blog by David (Clinkers) in June 2012, reposted to this blog with permission.)

It was indeed a momentous week in the UK and the Commonwealth. There are celebrations up and down the land. People are festooning buildings with bunting and street parties have been organised. All of this to commemorate and give thanks for . . .  Rita. Yes, on Monday, (Tuesday and Wednesday in Canada this week) Rita Littlewood-Bates(unofficial)-Fairclough-Sullivan is due to waltz down the aisle disguised as a large peach cobbler. The octogenarian shop assistant will be joined in holy matrimony with a bloke she hadn't previously clapped eyes on since 1964.

We've been lucky enough to follow the life and loves of Rita for the past forty years. In her early appearances, Rita occupied some kind of middle ground on the show. While never bring as brassy as Elsie Tanner, she was also some distance from being Emily Bishop. We don't know too much about Rita's backstory. What caused her to reach her forties without so much as an ex-husband or an illegitimate kiddy in tow? By the time we met her in 1972, she was already middle-aged. Unmarried, living in sin and working as a cabaret artist, she could have easily been judged as a slut. Yet throughout, Rita has always retained a certain dignity which has stood her in good stead over the decades. 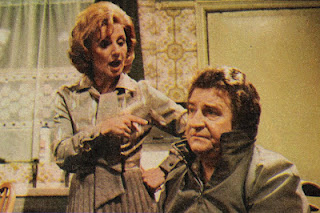 For many years, Rita always retained a certain image which harkened back to better days. She tended to look smart but in reality, she was a bit tatty with her blousy tops and that nasty fake-fur coat that did the rounds for most of the 1970s. Her marriage to to Len in 1977 gave Rita a bit of status yet in those early post-wedding days, she appeared to be morphing into some backstreet bitch, with her constant carping for a better life. It was a war of attrition but eventually Rita came out on top - briefly.

The demise of Len could have reduced her to a life as yet one more Weatherfield Widow. It was not to be. Rita went onwards and upwards. Many years later, when a vicious Bet Gilroy rounded on Rita in the Kabin, she snarled that Rita wouldn't have been anyone without Len's money. That's true but Rita used it wisely, on the whole, although she was fleeced by two of her vile foster children, Sharon 'Kennels' Gaskell and Jenny Bradley. 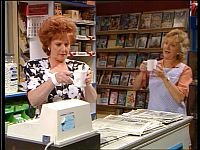 Rita has 'survivor' stamped all the way through her. A bit like Blackpool rock. She (and indeed we the viewer) survived the slightly too long Alan Bradley saga. Reet also buried a second husband, the mild - that is to say dull - Ted.  As Rita once recalled "He appeared in t'Kabin one day, we married the next, had a wonderful honeymoon, he died, had a lovely funeral and I was back behind the counter in time for Monday morning's papers." Well, maybe she didn't say any of that . . .

Anyway, in the golden autumn of her years, the fragrant Rita prepares to become Mrs Tanner but as this is Rita, there's a little business with a drug dealer to be sorted before she toddles down the aisle. Maybe she is a bit of a bad 'un after all . . .