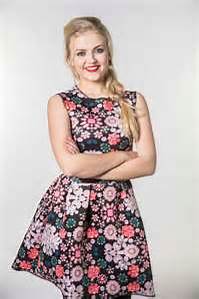 The first time I interviewed Lucy Fallon was some months ago, just as she had had the call to say that she was after all going to play Bethany Platt. Lucy Fallon had auditioned for the role of Bethany Platt, been turned down, then, the very next day was phoned by her agent to say that yes, she had got the part. When Lucy was convinced that this was not a joke, she was utterly delighted.

Now, in my second interview with her, Lucy Fallon has grown enormously in confidence, unsurprisingly, since the last time I met her. Being an integral part of Britain’s most iconic soap is bound to increase an actor’s confidence. The character, Bethany Platt, has had an interesting couple of years and, as the focus has been largely on the Platt family in recent times, Bethany has had much involvement.

Do you think there has been a change in public perception towards Bethany Platt?
Yes, definitely. Now if I’m noticed on the street, it’s just a different kind of …the way people speak about Bethany is different and I think that people have really warmed to her character.

Which is more fun to play, this gentler, sweeter girl or the more gobby Bethany?
I do like gobby Bethany but I’m liking this sweeter aspect of her character, at the moment. When you’re acting it’s better to have different things to play. If she was gobby all the time, it would get a bit boring. I really appreciate that she has different layers as it makes the character more convincing. People have various sides to their characters – gobby at times and vulnerable at others, and at the moment, I’m really enjoying playing the vulnerable side.

Do you think that the change in audience attitude towards Bethany coincided with the bullying of Bethany by Lauren and her cronies?
Yes, I think so. Because of the Callum story, people thought that Bethany was still an annoying, outspoken teenager. But now, since they saw she was being bullied at school, that’s when it started, and people realised that she wasn’t as tough as she tried to make out. People noticed that the gobbiness was just a façade.

Will there be any follow up to the bullying? Lauren’s dad was pretty aggressive towards her and made threats.
That’s not in the pipeline at the moment, but who knows in the future?

Have you had any bullied teenagers get in touch on social media about bullying?
I’ve had quite a lot of people on Twitter saying how it’s helped them to speak to people. Other people have also been in touch to say it was hard for them to watch because they had experienced bullying in the past, so it served as a reminder to them.

Was the bullying story very pressured for you?
A little bit, yes. When story lines are serious like this, you want to get it right and do it justice, and not trivialise such a difficult part of life for people of any age. I was determined to do it well and get it right.

What’s Mikey North like to work with?
Oh, he’s great, really nice. He’s a really down to earth person. It’s so nice to have a chance to work with other cast members. I enjoy being introduced to other people on the street.

And what about Christmas Day on the cobbles for Bethany?
On Christmas Day she is desperate. I think that is another turning point for her. This one is dreadful. She turns to the diet pills again. On Christmas Day itself she actually collapses. She’s at her lowest point. She seriously believed that Gary was interested her. He is, but not in the way she wants. Gary is in love with Sarah. Bethany actually lets herself into his hotel room.

As a relative newcomer to Corrie, a big show with all its history, is it what you expected it to be?
I can’t say because I didn’t know what to expect in the first place. I’d never ever done anything like this, so had no idea what it would be like. But I absolutely love it.

Have any of the cast given you good advice?
I’ve had lots of great advice but especially from the actors who play members of the Platt family. Especially Helen and Tina (Gail and Sarah).

How has your life changed?
People recognising me has changed my life but I still have the same friends and go out with them at home in Blackpool. I still live with my mum and dad, so nothing’s changed dramatically. I might be moving out again this coming year. I’ve tried it once – I moved to Manchester and then I came back! I missed my family, so if I do move out I’ll stay closer to them.