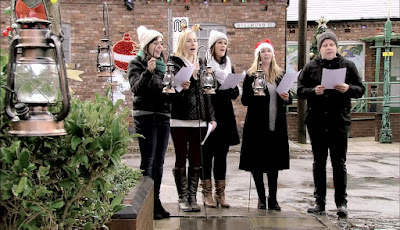 This year, the Christmas Day episode of Coronation Street opened with a choir singing a very nice accapella version of "Last Christmas" which was originally recorded by the pop group Wham, with lead singer George Michael. By the time the episode aired in the evening, the world had found out that George Michael had died so it was particularly touching. For me, more so because after hearing it a few days before, it had been stuck in my head for days! I wonder if that was an omen or just coincidence?

But on last night's Corrie in the pub in the second episode, the Wham version was played. That was a bit jolting and I wonder if it was dubbed in at the last minute as a tribute? Certainly, the day before, fans on social media had picked up on the coincidence. I found myself thinking surely they wouldn't normally have used the same song two days in a row?

In other surprises, I really never expected Maria to be sent to jail for the immigration charge. I don't think she'll be in jail for the whole year. I reckon she'll be out before Easter but it did seem a bit harsh sending a single mum to prison the day before Christmas for a non-violent crime. Surely they could have ankle-tagged her and let her stay home over the holiday?

Mary's story with her newfound son was my favourite Christmas storyline. It was really touching to see her smile when he introduced himself and called her Mum straight away and then seeing her face when she realized she was going to be a grandma went straight to my heart.  If she doesn't change her mind about moving to South Africa, I will miss her very much. Maybe she'll go and stay to see the baby born and after a bit, come back. I'd find a Weatherfield without Mary much lacking. I did feel a brief pang for Norris with another friend leaving him behind, after Emily's departure last year at New Year.

I'm sure Steve or Michelle mentioned that Liz was gone to Spain to spend Christmas with Andy but there she was on Boxing Day behind the bar. Seemed a bit odd that she wouldn't take a couple of extra days off. 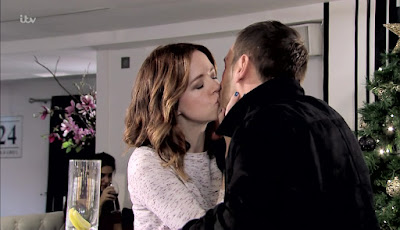 Peter and Toyah? I find them an odd couple, too, though I did guess weeks and weeks ago that she was his new girlfriend. Toyah would have known about Peter's past and his faults through Leanne for years. I did enjoy her tearing a strip off Nick in the hospital but it got me thinking, what was it in their past for which  Nick thought Toyah was raking him over the coals? The only thing that came to my mind was him insisting Leanne have an abortion before he then left her back in the day. I know he's done other stuff but that, for me, at least, would have been the start of the "I hate my sister's partner" mantra. I do like both actors, however, so I'm sure they'll do the storyline justice.

I'm also concerned as to the 180 degree turn that Andy's personality has undergone. Murderous intent? Stashing a few packets of pills in a carry on bag three times the size of the doctor's bag from where he took the pills? Yet, no news of a drugs theft has made its way through the gossip mill, via Rana since she works there. Eva's bought Aidan a kitten. That's even more committment than he's ready for with her. He is in love with Maria but I notice he's not finishing with Eva now that Maria's been sent down. More and more I dislike that character as an arrogant, selfish prat but I don't mind the actor. I can see Johnny's point of view. Why would Aidan prefer Maria over Eva who's gorgeous and has a big, kind heart? I think it's the knight on a charging horse, saving the damsel in distress that's the attraction.

There's always a public argument so the Nick and Peter thing didn't bother me except to make me dislike Nick even more. It was nice to see a house full of Barlows. Nice to see Mary so happy with her friends being supportive. Sarah and Gary are on and off more than a light switch and that's getting tedious.  Eileen has proven her stupidity with men continues by proposing to Phelan. Billy had a revelation and is going back to the church. I think it suits him but I wonder if this is going to be the thing that comes between he and Todd permanently. There wasn't a lot of pubbage this year, I notice, which was different. There were a few scenes but in the past, quite a lot of action would be based in the pub on Christmas night and Boxing night.

Overall, though, Christmas on the cobbles was ok.

Billy is flaky...in the church, out of the church, back in the church...makes him appear to be immature
Please stop adding new characters - the girl in the bar that took David's wallet, is she the same one that hides in the back of the church and gets a job at the café? - David is not over Kylie so stop pushing a female character at him, it's too soon.
There is too much murder and jail for a backstreet neighborhood, not at all entertaining

I missed something about Jude's arrival. Did he just happen to be in the UK when he saw Gemma's post or did he manage to fly in from South Africa so fast and specifically to meet Mary?

I think he must have seen Gemma's video or heard of it and flew in. It must have been pretty important to him to fly and leave his family on Christmas!