What next for Peter & Toyah? Georgia Taylor tells us everything! 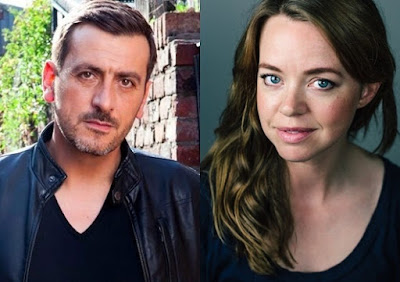 What did you think when you found out Toyah was going to be Peter Barlow’s love interest?

That was honestly one of the main reasons I agreed to come back.  I just think Chris is such a great actor and there is always going to be drama around that character and also the fact that he was previously married to Leanne, so I just thought it was the most brilliant idea in terms of  creating drama and I knew I was going to be working with such brilliant people in Jane and Chris and Ben. That was one of the biggest draws for me to come back. I was coming back to guaranteed drama and guaranteed storylines with great people.

Just brilliant. My first day’s filming was in bed with him all day at a hotel. We were thrown in at the deep end - literally in a bed all day! But it ended up being the best way to start working together because it broke the ice and we just had to get on with it. We ended up having a proper laugh and it made us very relaxed. You can’t have any inhibitions you want the audience to believe these people have been together for six months and are genuinely in love and at that very passionate stage of their relationship. You can’t afford to be embarrassed and awkward, you have to commit to it and we did. And we had a laugh. Chris is also great at wanting to get everything right. We often stay behind for an hour and run our scenes for the week to get ahead and talk through any issues. He is very committed to wanting it to be right and I like working like that too.

I had worked with him briefly in the past when Toyah was raped and Peter saved her from the rapist Phil Simmonds who was going to attack her again so they do have a history. He was there when she was at her most vulnerable so in terms of storyline when Kate Oates was telling me about the story I felt that it worked.

What do you know about their relationship history?

The story is that she was visiting a friend in Portsmouth and they bumped into each other in a bar and got chatting as old friends. She was in a very vulnerable place as she was in a relationship that wasn’t working. Had she been happily married it would probably have just been a brief chat and a drink, lovely to catch up and then they would have gone their separate ways. But it is all to do with timing and they ended up having an affair.

Why haven’t they told Leanne before now?
Because Toyah is fearful of what the reaction would be. She doesn’t think Leanne is still in love with Peter, she can see how devoted she is to Nick but still it is kind of strange isn’t it, getting involved with your sister’s ex husband!

The initial plan was not to keep it a secret, they made the pact on Christmas night to ‘rip the plaster off and deal with it’ but then Leanne has a scare with the pregnancy and is told stress could be bad for her and the baby so that moment is gone. Again it is all to do with timing, it is clever how it all pans out. From then on there isn’t a right time and it drags the process out but along the way other people start to find out so they are living on borrowed time!

What will it mean for her relationship with Leanne when the secret comes out?
I think the biggest thing is the act of betrayal, almost Leanne would get over the fact that she is with Peter if she had been honest with her. Jane and I have talked about this, they grew up together and went through so much together, they are sisters not in blood but in every other way. They are best friends and she hasn’t told her about a significant relationship - or that her marriage was in trouble because of going through unsuccessful IVF treatment. It is the betrayal of that sisterhood and feeling that they are are not as close as Leanne thought they were and about her feeling humiliated as well.

What is it about Peter that attracts her?

He has that twinkle in his eye and is very charismatic, Chris has a natural charm about him that you can’t deny that comes across on screen, he is very playful. But I think also because she has previously worked and trained as a counsellor because she has found herself drawn to someone who is a recovering alcoholic who has a huge amount of his own demons then ethically and morally that could be questionable. Kate and I talked about this and we liked the idea of exploring that.The fact that she comes professionally from that background and now she is with a addict, maybe she thinks she can fix him, and in trying to fix someone else you can ignore your own demons.

She wants to be a mum - is Peter Barlow a good father for her children in the future?
On paper you would say absolutely not but when he is on good form and when he sober and at his best he had glimmers of being a wonderful dad. There are some scenes coming up in a few weeks with Peter and Simon. Chris is so great with Alex, they were playing computer  games and I as Toyah was just watching them and there was a real moment of going ‘gosh when you are on form you are a brilliant dad’ but obviously his behaviour and addiction has got in the way in the past.But if he stays on the straight and narrow then potentially he could, but this is soap so is he going to stay in the straight and narrow?