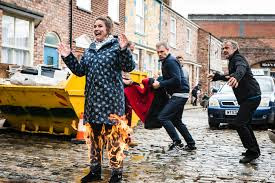 “Have it large!” Fiz tells Rita as she sees her leaving for her night out with Freddie.
“It’s the only way I know how!” Rita replies.

When Beth and Kirk reunite she tells him: “I’m like a cheese sarnie with no pickle. Come home and be my pickle again.”