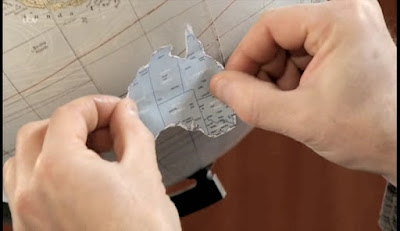 Christmas present fail: Tim bought Sally a globe. Sally. Not Faye. And the globe is missing a whole continent. Australia.

Phrase of Doom award: Cathy has never felt so sure of anything in her life. Um. 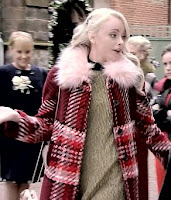 Fashionista awards: Loved Sinead's coat. Other Wedding fashion notes: Rita's glorious purple hat. Mary looked lovely with her hair down and curled and a flower behind one ear.

Mystery solved award: Seems that Cathy has rented out her house. That answers the question as to why she didn't live there or let Alex live there.

Phrase of Doom award: Kevin threatening that Phelan's going to pay, within earshot of a witness.

Literal award: Roy doesn't see nuances. He assumes people mean what they say without any other meaning.

Throwback award: Fred Elliott made a verbal appearance via Gail. "How many of you will be goig at it!" (the joint of meat he sold you) Sarah asked Aidan if he ever hears from Candice! (they used to date). Kevin mentioned his conviction for whacking John Stape.

All is Forgiven award: Eileen has seen the light so to speak. It's all back on between she and Phelan. 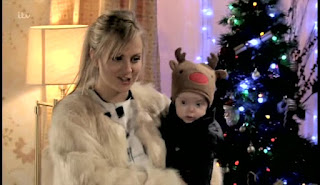 Lines of the week:
Nessa "Sorry I'm late. I was on the bus and I realized I was wearing the wrong bra" (Too much information!)
Nessa to Tyrone "You're a mechanic, not a Flying Doctor"
Sally to Tyrone "You're not sitting next to my Donna Karan with those dirty overalls on!"
Alex to Roy "How are you feeling?" Roy "Happy" Alex "You should tell your face that." (HA!)
Michelle "They're not even born yet, Liz, and you're making play dates already"
Cathy "For what it's worth, I do love you, Roy Cropper" Roy "Thank you" (ouch)
Luke "Two nights in a row? that's practically relationship territory" Tracy "No...it's not as if I actually want to talk to you" (classy)
Peter to Tim about Sally's Christmas present, a globe "I wouldn't want to be in your shoes Christmas day, mate"
Roy "I took her at her word, as I do, I take people at their word. How am I to decern beneath that?" (That's Roy's problem, isn't it?)
Mary on sustainibility: "It's a small price to pay if it stops the ice caps from melting and drowning us all"
Bethany to Sarah "You're the brains of this family" (you poor, deluded child)
David "I don't dance even when I'm not grieving"

I loved all,the references to past characters as well! Just one small correction, Sarah asked Adam about Candice I completely forgot they had dated and had to look up what happened with them. I always liked her character - she was funny.

Do you know if the CBC has made any announcement about what they plan to do about the extra episode each week? Will they add it to the schedule or will we gradually fall behind again?

Haven't heard anything about the extra episode yet. It isn't due to kick in until the fall in the UK so I wouldn't think we will know for sure what CBC plans to do until closer to the summer.