Meeting Georgia Taylor, who plays Toyah Battersby, was particularly enjoyable, because it was evident from her delighted smile that she was as pleased as punch to have been asked for a full return to the cobbles.

How do you feel about having been asked for a proper return to Coronation Street?
Absolutely fantastic! This is only my second day here, so I’m nice and fresh. I’ve been asked back before but only for a few episodes here and there, but I’ve never been asked back on a full time basis. I was asked quite a few years ago to do a couple of episodes. I’ve always said if I came back, I’d want to commit to it and feel that there was a rea creative reason for me to come back – not just be a wedding guest. That didn’t really appeal to me. I also said that if I did come back, I’d want to have good storylines.

Will you be wearing the same sorts of clothes as you did as teenager Toyah?
(Laughs) Oh no, they’ll be completely different outfits. Toyah is in her mid-thirties now, so her style has changed a bit.

How easy or difficult has it been to reconnect to your character after quite a while?
I’m still finding her, at the moment. I left in 2003 to go to London with Spider who was setting up a juice bar down there. When I had my meeting with Kate (Oates) a couple of months ago, I said I need a sense of what’s been happening for the last few years. It’s important to me that there are still things we cling onto from the original character. So I insisted she’s still vegetarian and that her relationship with Leanne is still strong. Toyah has grown, matured. She’s had relationships, she’s moved and travelled. There will be a combination of old elements and new ones.


Did you look back at old episodes to remind yourself of how you were?
Oh yes, I looked at old tapes – it was horrendous! But it also made me feel nostalgic. We were so young, just these two sisters who were rough around the edges. It’s weird. I didn’t recognise myself. My voice was different, I look different. And what about now? How will she have changed?

We find her married. She’s been married for about five years and she’s been living in Liverpool. Prior to that, she was in Sheffield, then London and she’s also done a lot of travelling and touring of the festivals. She’s been out and about and she has met a huge variety of people. She’s more confident. We’re going to meet her husband quite early on and there are things that have happened in their relationship that have impacted on the woman she’s become. She’s realised life doesn’t always turn out as you thought it would – and you don’t always get what you want.

When exactly will we see you on screen? 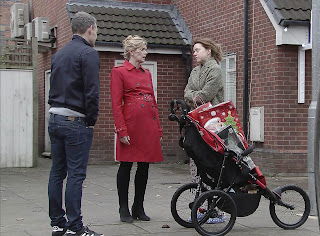 On Christmas Day, she’s supposed to be having Leanne, Nick and Simon for Christmas dinner, but that doesn’t happen. She turns up at Leanne’s in a terrible state, in her old banger of a car and says, “Christmas is off, I’ve messed everything up.” Then things start to come out. She’s having a real tough time with her husband. She wants her support network around her. It is revealed that she has had a huge argument with her husband and she just ups and leaves.

So what happens then?
Well, when you go back to somewhere you grew up as a child, it’s a really interesting thing. Leanne is a huge part of that background and I think Toyah has reached a real crossroads in her life and she just wants that support. There are other people on the Street too, like Roy, who she was always close to.

Do you know how long you’re going to stay yet?
It’s going to be for at least a year, so we’ll see how that goes.

Have you had any reactions from the public?
The public’s reaction has been really positive. I’m so pleased and relieved about that!

How did you make your decision to return? Were your heart and head in conflict?
My heart was very much saying yes on my drive back to Bristol, but it was such a huge decision. I didn’t want to undo any good work I did the first time around. I’ve been a jobbing actress for thirteen years and when you come back into a show like this, you’re completely committed. I’ve been doing my homework and watching the show as much as I can, but I’ve also kept up with it anyway.

Can you remember what you were like when you first moved onto the Street
We first met Toyah when she was a gobby teenager.  Later, she became an eco-warrior and I loved that – that’s when she got her own identity. She came of age. Out of all the Battersbys, she was the one who wanted to better herself the most. Ken took her under his wing and she was also close to Roy – I loved those relationships. When we meet her now, as an adult, she’s trained as a counsellor – which makes a lot of sense, with everything she went through, especially the rape. She’s a very caring and nurturing person.


Is there anything else you would like to comment upon concerning your return to the cobbles?
It wasn’t the reason, but it does feel fitting that it’s 20 years ago next year since The Battersbys appeared. They are one of those really memorable families. It’s worked out really nicely. In the canteen,though, I’m like, “Where are the knives and forks? What do I do with my empty bowl? Where’s the coffee machine?’

There’s a lot to take in. I’m just trying to get to grips with everything, really. We’re in a brand spanking new studio and there are a lot of familiar friendly faces, but a lot of new faces too.

When you were first offered the return invitation, who did you discuss it with first?
Jane was the first person I spoke to in the whole world when they asked me to come back. She was brilliant. I was in touch with her the whole time, she was like my counsellor. She’s one of my best friends. She was delighted when I finally made my decision.


We haven’t had the chance yet to celebrate, but we will do. It was crazy back then. I clung to Jane, we were a bit like rabbits in the headlights. The publicity that surrounded our family was huge. There were polls saying we were the worst thing to have ever happened to the Street. It was just a crazy, crazy time. I look back and I wish I’d have kept a diary. For a good year, it was a complete whirlwind.