Sisters, sisters, there were never such devoted sisters 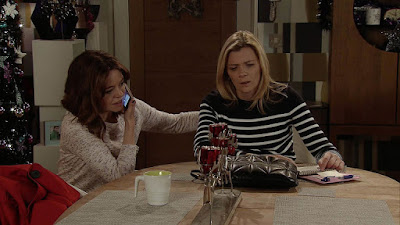 (This post was originally posted by Ruth Owen on the Coronation Street Blog in January 2017, reposted with permission.)

Sisters, sisters, there were never such devoted sisters…so goes The Beverley Sisters song.

And the sisters in question are Eva, Leanne and newly arrived Toyah. Just to clear up who is related to who, Leanne and Eva are half-sisters, both have the same mother, the former landlady of The Rovers Return, none other than Stella Price. They weren’t aware of each other for a long time and once they were informed that they were half-sisters, initially they were quite hostile towards each other – understandably so, though perhaps, Eva was the more hostile of the two, having to share her mum’s affections with someone else now. Since their early difficulties though, Eva and Leanne have been great together and sharing a place has cemented that relationship. Eva is a very good aunt to Simon and genuinely cares for him. Finding him crying in the ginnel, in last week’s episode, Eva asked what was wrong and it was revealed that Simon had seen Peter and Toyah together. Eva’s expression of disbelief was legendary.

Toyah and Leanne are not related by blood ties – Toyah’s mum is Janice Battersby and Leanne’s  Dad is Les Battersby, so the girls, Toyah and Leanne, do not have a parent in common, so are stepsisters. It is my view that not having a blood connection with someone does not mean that you love them any the less than if you did have blood ties. As evidence, it is apparent how much Leanne and Toyah mean to each other.

Clearly Eva feels threatened by Toyah, maybe fearing that her close relationship with Leanne will be diluted or at least affected adversely by Toyah’s arrival.

Finding cigarettes in her flat, Leanne instantly accuses Simon. The cigarettes were Peter’s, but Toyah couldn’t (wouldn’t) admit that, because Leanne would be confused as to why Peter was at the flat, then it would be revealed that they were having a relationship, which might upset and stress the expectant Leanne.

In fairness to Toyah, she did claim that the cigarettes were hers. Leanne is no fool though and saw through her lie. Thus, poor Simon had to have a real rollicking from his mum about how shocked she was that he had taken up smoking. He also had to withstand a lecture on the dangers of smoking and hear how much she had been shaken up by discovering he was smoking. Punishment – confiscation of the drone and grounded. Simon felt the injustice severely

But now, matters are teetering on the brink. The baby shower brought out the animosity between Toyah and Eva. Harsh words are exchanged. Eva warns Toyah, ‘Watch yourself – I don’t like you and I don’t like what you do.’ She adds, ‘Getting it on with your sister’s ex, lying about the cigarettes.’ All delivered with terrific venom.

There’s so much potential here in the relationships between Toyah, Leanne and Eva and it will make for some terrific forthcoming viewing.