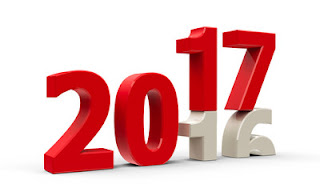 (This post was originally posted by David (Clinkers) on the Coronation Street Blog in December 2016, reposted to this blog with permission.)

Here we are then, that awkward in between bit. Christmas is over but the decorations remain in place in order that we can toast a New Year. We're down to the last slices of festive fowl ("turkey soup anyone? Was that a 'no' ?"), the tree is looking a bit dog-eared and everyone but everyone is foisting their '2016 lists' upon us. 'My Top Ten Favourite Country Crossover Hits 2016', 'My Top Five Dictators of 2016' - that kind of thing.

Well, now it's my turn. Before you start hurling leftover mince pies and relatives at the screen, fear not. I'm not about to arduously offer a week-by-week reportage of all things cobble-based. It's simply a reflection of how I feel at the end of the year. Feel free to disagree. Seriously - let me know what you think! The great thing about this blog is hearing the opinions of other viewers because quite often, there are views about the show that I've never considered.

Admittedly, I am enjoying Corrie at the moment. Whereas it seemed a little leaden last winter, the storylines now seem to bounce along. Yes, they may be dashing past our eyes a little too quickly. The tale of 'Mary and Son' seems to have been introduced and completed within a matter of hours:

Mary: I've got a son that I've never mentioned before. I wonder where he is? Here he is! I'm off to South Africa now to live with him forvever so goodbye.

Or something like that. Likewise there have been a few continuity errors such as Liz spending Christmas in Spain but being back behind the bar a few hours later. Or Andy suddenly becoming Mr Malevolence overnight. All a bit jarring.

I never thought I'd hear myself saying that the Platts were probably one of the biggest joys of 2016 but ... err, the Platts were one of the biggest joys of 2016. There has been a wealth of fine acting from Tina O'Brien, Jack P. Shepherd and Lucy Fallon. Let's not forget Paula Lane and that achingly sad death scene. Nick seems to have taken the bus to Idiot Street. When he's not squinting and whining, he's doddering along, getting it wrong. Gail, thankfully, seems to have shrugged off her own personal cloak of idiocy and we can only hope for normal (well, as normal as it gets for Gail) service to be resumed as soon as possible. 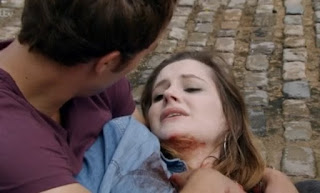 At the other end of the scale we have the very unlovely Eileen. This one-woman joy-sapping machine is a megaphone of misery and bile. Okay, she was never exactly the laughing fairy of Weatherfield but she's festered into something quite unpleasant. Oh and stupid. I found myself willing Pat 'soft lad' Phelan to bleed her dry but then realised that we would be left with some bellowing, hollowed out husk, bemoaning her lot for eternity. She needs to lighten up or jog on.

Rita's been great this year. I've enjoyed her and that hasn't always been the case. I'm one of the small number who has never warmed to her sanctimoniousness and feared the worst when poor old Gemma appeared on the Rita Radar. Would the cheque book and 'now listen here lady' homilies be finding a new home? Not at all. Rita's been warm and supportive to a girl who is trying her hardest to shrug off her unsavoury past. The mistakes she made with Tina don't appear to be on the cards again so thank you Corrie storyliners. 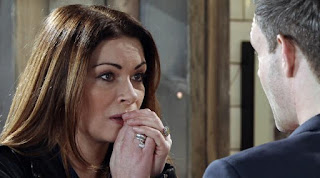 The big disappointment of the year, for me anyway, was the departure of Carla Connor. This should have been something special, a glittering finale to a decade of wine, men and knickers. Carla's swan song could have been dynamite - old scores settled, friendships cemented and suchlike. Instead she was married off to Old Father Time in yet another joyless Bistro wedding (they certainly get their money's worth out of that set and it's lovely VISA sign. Did you see it over there on the door, the bar, tattooed across Andy's brow?) Carla shuffled off to live in a tea room in Looe or something. It was rubbish and the character was badly served with this wet story.

The other nays for me included the Kirk/Beth bigamy shenanigans. Although well-acted, it was another of those 'grafted on' stories that felt uncomfortable. Cathy didn't really work too well either as she's portrayed as being both brittle and needy. Hooking her up with Roy felt wrong but we can now all rest assured that the relationship is over. Can't we?The potential Audrey & Ken hook-up was a bit of a mess too but thankfully Dame Kate of Oates seems to have tossed that story into the Corrie Cupboard.

Big hurrahs then for the seamless dispatching of Sharif Nazir, another character who suffered from an overnight personality change. Hopefully this has freed up Yasmeen for greater things. She deserves it. Let's hear it too for Erica, a character that has had to take on both Dev and his sly children. In an ideal world, she would buy the Corner Shop and run it on her own. Erica doesn't need the encumbrance of the Alahans. The fresh lease of life for the Barlows has also been, to date, a joy. Adam and Daniel seem to be positive additions to the clan and Peter's always good fun.

Thumbs up for Leanne, if not for her bizarre pregnancy waddle. Presumably the M & S mac is acting as a restraint. Let's hear it for Gemma, Eva, the underused and soon to depart Steph, wily Jenny and the superb Tim 'n' Sal. Bouquets for one and all.

What are you wishing for 2017 then? For me, a phasing out or revamp of Maria would be welcome, a new direction for Chesney and Sinead (or a Weatherfield Wayfarer out of the Street altogether), the option not to take the obvious route re David and Shona (how old is she anyway?), Eileen to be buried in a landfill site somewhere on the outskirts of Rhyl, Gail to get married before Easter, at least one scene to show that Nozzer is sharing a house with the Odd Couple, Kevin to marry Anna if only so that we can chortle at Sally's outrage . . . the list goes on. And on.

I'll leave it with you then. What was hot and not in your Corrie world in 2016 and what is on your wish list for 2017? Play nicely! 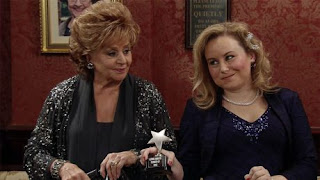 My wishes if you bear with me, keeping in mind that I am a Canadian viewer.
1)Maria and Liam to permanently move to wherever her parents live now (Maria's time is done on the street)
2)Sean to find true love
3)Billy to return to the church full time and him and Todd get married
4)Phelan be punished to the full extent of the law
5)More storylines for Kirk, Beth and in particular Craig - who I love and would love to see him pursue his dream of being a police officer
6)Let Simon grow up! Tired of everyone treating him like a baby
7)Leeanne to give birth to a beautiful, healthy baby (not sure if Nick should be with her)