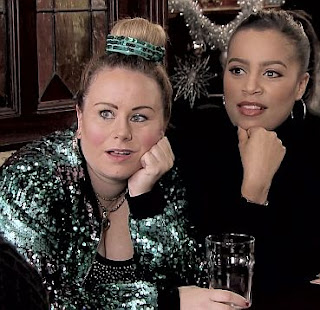 Best Dressed award: Gemma and her Boxing Day glitter. and special mention to Eccles the Elf!

Tear Jerk award: Lily pretending to talk to Mummy on her phone and David continuing the conversation. *gulp*

Throwback award: When the barman asked Peter what he would have, he answered "Now, there's a question". (Elsie Tanner's last words on the show in January 1984)

Post Mortem: Toyah and Toby raking their marriage over the coals.

Teenage hell award: I feel for Bethany and her emotions and her crushes. It's all very realistic. She's really just a kid trying to figure out what growing up is all about.

It's Not The Size Award: Andy sold the tablets which he must have had in that big duffel bag, three times the size of the doctor's bag where he took the tablets from and which would have held far more than just tablets. The envelope with the money wasn't large either. Why the huge bag? 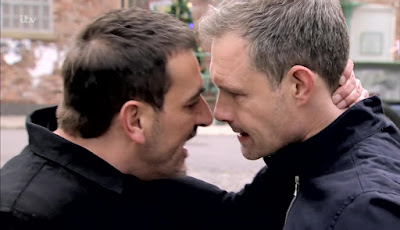 Continuity fail: Liz was supposed to be in Spain on Christmas Day but was behind the bar on Boxing Day. Toyah told Roy that Leanne was in hospital. Simon told Peter Leanne was visiting Janice. Which is it? If the visit thing was a lie so Simon wouldn't worry, that's just wrong. He's not 5 even if they still sometimes write him that way.

Musical ambiance: Phelan is threatening Andy out back of the pub to "You Ain't Seen Nothin' Yet" (a bit of Canadian content, by the way, Bachman Turner Overdrive)

On Christmas day's episode, a choir sang "Last Christmas", a song from Wham and George Michael. Nobody would have guessed that he would have passed away that day. Boxing Day in the pub, Michaels' version of Last Christmas was on the juke box. I wonder if that was dubbed in at the last minute? Seems odd they'd have used the same song two days in a row otherwise.

Lines of the week:
Tracy "Why do joggers look so smug?" (Nick jogging across the road). Peter "It's nothing to do with jogging. He was born smug" (yes. yes he was)
Peter "'Barlow', Viking word for 'Welcome'" (and now we know why he wasn't bothered at Toyah showing up!)
Peter "It's Christmas Day and I have got a brain!"
Michelle "I've had toothbrushes with more culture than you" Sally "Oh Carry on, it's just chip paper in the window of life" (none of this made any sense and it all felt very awkward!)
Todd "Is Jason coming home for the wedding, because you'll want some guests"
Norris "Look at us. Three wise men and a Mary"
Jude "Merry Christmas, Mum"
Leanne "Praise the Lord, the Spirit of Christmas is resumed"
Bethany "What kind of stupid idiot falls for her mum's boyfriend. Twice" (an emotional teenage girl, that's who)
Tyrone "I don't like jelly. You can't trust it. It's the way it wobbles"
Peter "I can explain. It's not what it must have looked like" (playing tonsil hockey is playing tonsil hockey no matter how you try to explain it)
Norris: Emily to Peru and now you (Mary). It's beginning to look like you're all trying to get away from me" (what was your first clue)


I have to say, the New Year's episodes felt a bit choppy. There's confusion over Leanne's whereabouts which must have been around a lie to Simon as to where she was. Cathy hasn't been seen since the wedding and shows up in the pub alongside of Roy. Little Jack was still up when Kevin got the breakdown call for Johnny and, after cutting directly to the pub, it seemed like it was 10 minutes to midnight. Quite late for a 5 year old to still manage staying awake.

Someone is mixing up tablets and pills here. Andy stole the iPad type devices from the restaurant (as nick had received 20, not the 2 he ordered, hence the big bag, and a few pills from the doctor's office, likely in his pocket.