The cobbles without Mary? Unthinkable! 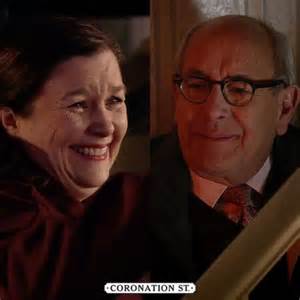 (This post was originally posted by Ruth Owen on the Coronation Street Blog in January 2017, reposted with permission.)

I can no longer imagine Weatherfield without Mary Taylor. As she and Norris sit in the outside space behind The Rovers Return, the pair are a little awkward together. Mary’s impending departure to South Africa, with her newly discovered son, Jude, is causing the difficulty between them.

‘I do love a firework display – very dramatic. A fitting backdrop to my Weatherfield departure,’ states Mary. She asks Norris if he’ll visit and assures him, over his worries about high temperatures, that the air-conditioning is very good. But, apparently, his sinuses wouldn’t allow such a trip.

When Jude arrives, Norris excuses himself and Jude makes it clear that he has no wish to pressurise his newly found mum, into doing something she doesn’t really want to do. To the viewer, her denial rings a little hollow. She tells him, ‘You’re not pressuring me. This is the start of a whole new chapter of my life.’

Time to go now and in The Rovers most of Mary’s friends are gathered and ready to wave Mary on her way. In the background, The Supremes are singing Where did our Love Go? Is this song significant? To whom does it relate? Or is it purely coincidental?

Hugging Norris, she tells him, ‘I’m just a phone call away.’

Outside The Rovers Erica kicks off with, We’ll Meet Again, as others join in. The taxi leaves with a very upset looking Mary inside.

We then see Norris, sitting on his stairs, distraught. It seems he had under estimated the strength of his friendship with Mary, who has succeeded in making Norris a more likeable person.

And then – there is a loud hammering on Norris’s door. It is Mary. She couldn’t go through with it. ‘This is my home, everyone I love is here.’ She is back. Jude understands. And I, for one am mightily relieved.

As Rita said to Johnny, ‘Happiness is a slippery fish – grab it with both hands.’ There’s a lesson for all of us there.

I was also glad Mary stayed. This storyline was interesting for her and she became less of a caricature. I'm just hoping they don't forget about it and we continue to hear about her son and how they are managing with their new relationship.