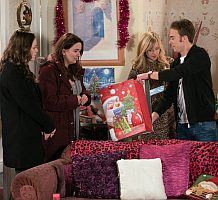 It's Christmas on the Cobbles. Toyah shows up to surprise Leanne and has hit a bump in her marriage and later insists to her husband it's over. Nick and Peter fight in the street over Leanne. Simon discovers who Peter's girlfriend is. The Windasses join the Platts for Christmas. Sarah discovers Bethany's crush on Gary. Bethany spirals out of control and is rescued by a man called Nathan. Sarah makes a decision. Bethany may have made a friend. Billy invites a homeless Shona to Number 11 for Christmas dinner. Mary's son, Jude, arrives in Weatherfield and he has a proposition for Mary. Anna and Faye move in with Kevin. Kevin gets worrying news about Sophie. Billy is torn between his new life and his old one. Anna has an accident. Andy's desperation may lead him out of Weatherfield.