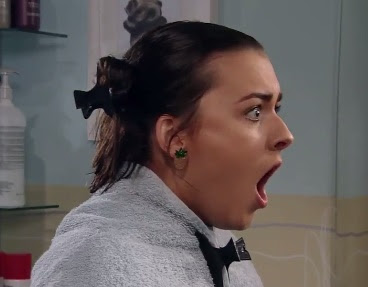 Phelan and Vinny start to swindle the Street, Caz moves in with Maria, Jenny shops the factory girls to Johnny, Eva uses her charms to get Aidan to move in, Craig discovers Beth tried to scupper his application to be a copper and moves in with Sally and Tim, Nick pretends he's Leanne's baby daddy, David gives bully Lauren a haircut she'll never forget, David hunts down Kylie's killer online, Sean celebrates his 40th, Craig visits dad Darryl in jail.

“I’m no Ernest Einstein, but I’m not stupid, you know!” says Kirk
“You know what they say about a man in a tux,” comments Aidan in the Rovers when Luke arrives dolled up to the nines.