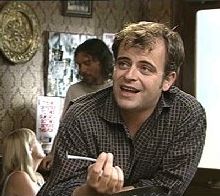 According to this little news tidbit, CBC has renewed it's contract with ITV to be able to air Coronation Street in Canada with a multi-year contract. That news site may require a login which showed when I first looked at it but then showed the whole article the next time so your mileage may vary.

They apparently have a quote from Tony Warren who says: “I am delighted to hear of the new Canadian deal especially as the unsung hero of the show, Harry Elton, who was the original executive producer and a Canadian, had the foresight to commission the programme.” They're also calling it Canada's "most popular drama serial" and indeed, Corrie is one of CBC's top rated shows. In spite of their purported "All Canadian" schedule, there are still a small number of non-Canuck items on the air which bring in the bucks and Corrie has always been one of their best-sellers.

Now with the double episodes, we're catching up at a rate of a month per month or a week per week if you want. Current episodes this week originally aired in late February 2011 which makes us 8 months behind. We were over 10 months behind at the start of September, so that's great progress!
Posted by Tvor at 06:27