Will the dead rise on Corrie? 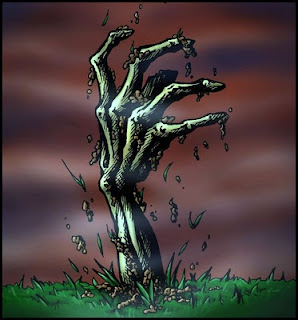 (This post was originally posted by Merseytart on the Coronation Street Blog in December, 2010.)

When Phil Redmond was planning the famous "body under the patio" storyline for Brookside (another UK soap), he concluded that Trevor Jordache should stay hidden "until the actors decide to leave".

Corrie's got its own version of the hidden corpse now: Colin Fishwick, buried underneath Underworld's floor.  So the question is - will he ever be found?

It's a well known soap rule that people must be punished for their misdeeds.  Karmic retribution is waiting for John Stape somewhere along the line.  But I can't help thinking that Colin's going to stay there and never be seen again.

Think about it: he's not just buried, he's entombed.  Colin's inside a solid lump of concrete six feet under a factory.  He's not going anywhere, and Carla Connor's not likely to order the ground be torn up any time soon.

Brookside had a drainage issue cause flooding in the gardens, meaning that the neighbours dug around the patio and found Trevor's body.  It's possible that a similar case of shoddy workmanship could turn up at Underworld - but how hard is it to get concrete wrong?  And even if they did dig down, would they find Colin?

I'm curious to see what the writers do with this.  Perhaps Colin will only resurface once John has confessed all.  Perhaps he'll return from the dead as a zombie.  Perhaps - and right now this is my favourite - perhaps John will literally get away with murder.  There's something about his bumbling crime spree that I find hilarious, and I'm hoping it'll continue for a long time yet.
Posted by Tvor at 08:55