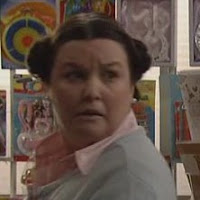 (This post was originally posted by Chewy on the Coronation Street Blog in February 2011.)

I've realised how many times Coronation Street references Star Wars this week. following Owen comparing himself to Han Solo, and Sunita comparing him to Chewbacca in Friday's episode. One of my favourite scenes of this year, was David and Gary talking to the police, when David comes out with the famous line "These aren't the droids you're looking for, move along". I wonder which one of the writers is a closet Star Wars fan then?

Anyway, getting to the point, I was wondering which Corrie characters are most suited to the weird and wacky world of Star Wars. I agree with Sunita, Owen would make a fantastic Wookie, or perhaps one of those little teddy bear Ewoks.

Edit to add:
I don't think Owen would make a good Han Solor or a Chewbacca, he'd be a much better Storm Trooper!

And you know what? My fella and I sometimes play a casting game, who would you cast as Corrie characters or vice versa and I recall we did a Star Wars version using Corrie characters...Roy would play Obi Wan Kenobi, using his Jedi powers for good. Leanne would make a great Princess Leia. Steve has to be Han Solo! Chesney would be a young Luke Skywalker. Mike Baldwin, in very high boots, would make a good Darth Vader (Adam/Danny, you are my son!!!) and Ken, of course, would be Yoda!!

Who would you cast? Maybe play it with Star Trek characters!
Posted by Tvor at 14:35

Email ThisBlogThis!Share to TwitterShare to FacebookShare to Pinterest
Labels: characters, fun and games