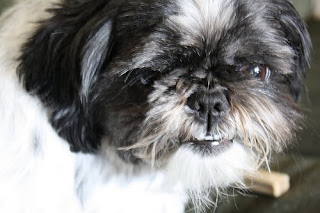 Everyone's skint loveys, not just folk like me and you but even international business tycoons like Steve and Dev. The only person with any cash to splash nowadays is Owen the builder who seems to have rebuilt the whole flamin' street with his merry band of men - well, Jason and Chris anyway. No wonder Owen's in a bad mood all the time, he must be knackered!

Mind you, Peter must have a bob or two cos he's gone on his honeymoon and shut the bookies without batting an eyelid! He must have more money than sense. I'd have run it for him cos, let's be honest, there's nobody else to do it, especially not Nick, he's still embarrassed after Peter made him wee with fright in his knicker briefs when he threatened him and as for John Stape, he's in the hospital cos his mind's broke!


Anyway, how can Dev be flamin' skint? He downsized after he sold that posh house in Didsbury and he owns that flat on Victoria Court as well. He keeps going on about that money that was nicked, 'five grand' he keeps muttering to himself. At Dev's prices five grand would only buy you two flamin loaves and a few tins of beans so how he thinks it'd be enough to rebuild and restock a whole shop I don't know! If only he'd have sent that cheque off, mind you, entrepreneurs like him are known for entrusting really important business cheques to Royal Mail!


The winner of this week's 'Getting On Me Flamin' Wick Already Award' is, Xin! Flamin' hell, talk about problems. She was in the cab office tellng me how she can't get the job she's trained for and how her ovens broke so she has to eat crisps for her tea and blah blah flamin' blah! You work in a restaurant lovey, eat there if yer so hungry and at least you've got a job! I've nowt in for me tea, I've a broken oven and I work in a cab office that's got a kettle in it and nowt else! Try living on Ainsley Harriott Cup a Soups for a week and then moan! But, me point is loveys, why should I even care? I don't even know her! She's just some lass Tina used to work with but they're suddenly asking her to move in! Mind you, Tina loves a charity case, look at her dad! When I asked if I could move in with 'em after Bernice's shih tzu knocked me ashtray over and set fire to me bed they weren't interested! It's all about how you look innit loveys! If I looked like Xin they'd have snapped me hand off - like Bernice's dog did when I tried to wrestle it from me burning bed... the little shih t(zu)!


I blame Tina for building it up too much, 'aww she's dead funny is Xin. She's a proper laugh is Xin'. Since when has Tina been a decent judge of what's funny or not? She spends ninety percent of her day scowling!

Fay(e) stopped the night at Eddie's and he said it went alright...after Gary and Izzie showed up anyway. I said to Eddie, 'as long as you didn't tell her that boring anecdote about that fella leaving his wig in the back of yer cab then I'm sure you were brilliant.' Eddie has many strong points loveys but telling stories isn't one of 'em. If he ever tries to tell you summat amusing don't build yer hopes up.


Carla's struck up an unusual friendship again after her friendship with Michelle who hated her for keeping Tony Gordon's secret and Leanne who was in the boot of her dead husband's car she's made friends with Maria whose husband she had an affair with and who had a relationship with Tony after Carla knew he'd killed Liam! Phew! Poor Carla, she'll make a friend that has nowt to do with her past one day and the world will implode loveys!


Talking of Leanne, her and Peter have decided to give it a go after Ken taught Peter about forgiveness. If Ken's so forgiving how come he still moans to Deirdre about her stuffed marrow? Hypocrite!

I hope David's being careful in Tenerife, he doesn't want to bring owt nasty home with him does he...


Tweeter me loveys if you've any gossip and if you haven't, yer not trying hard enough!
Posted by Tvor at 19:47