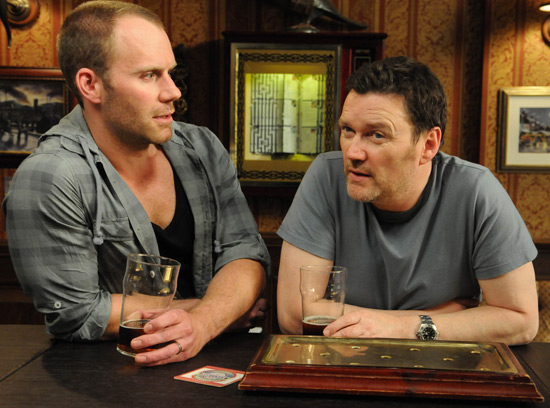 (This post was originally posted by Rebecca on the Coronation Street Blog January 2011, reposted to this blog with permission.)

Oooh, how nasty was 'Orrible Owen last night to Our Eileen (Saint of this Parish)? Very nasty! Creepy, threatening, just on the cusp of violence.... Amazing! I loved it.

We've seen Owen being violent before, especially when it concerns his two daughters Katy and Izzy. I'm not sure he would ever actually hit a woman - he seems that type - but he was certainly close to hitting Eileen last night when he worked out that she'd banked his £10,000 cheque from Carla. He left her in tears, fearing for her life probably. What a creep.

I'm by no means condoning what Eileen has done, by the way. Fraud is fraud, and what Owen should have done is call the police, but it's a soap, so he won't. She did a criminal thing, but I think the writers have been good in showing us how she's got so desperate so as to sink so low. She's usually a very moral person, and I think this is only a blip on her record... Just a very big blip.

I love both Katy and Izzy and would like to see them stick around. I can see Katy and Ches becoming the new Molly'n'Tyrone, only without the annoying bits, and I adore Izzy and how she's always sarcastic but also warm and funny. Owen though I'm not keen on, I'd love for him to go down for doing something 'orrible to Our Eileen.

I wonder what happened to Mama Armstrong? Judging by Owen last night, he probably bludgeoned her to death and buried her under the patio a la Brookside.
Posted by Tvor at 10:20