What of Sophie and Sian? 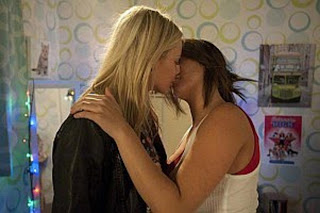 (This post was originally posted by Matt on the Coronation Street Blog in December, 2010.)


It’s fair to say Sophie and Sian have been through quite a lot since they admitted their feelings for each other and became a couple eight months ago. First Sian’s ex, Ryan, caught them kissing. Then they were caught out again by Claire, who outed them during an argument with Sally - in front of half the Street, on a train!

After that they ran away as Sophie was terrified of her mum’s reaction while Sian was just scared of her dad - full stop. Given that the only two times we’ve seen him were when he threatened Ryan and after they ran away and he accused Sophie of twisting Sian’s mind and abusing her, you can kind of see the girl’s point.

The fact these two appearances were over a year apart suggests he’s not exactly the most hands-on of parents. He then proved what a spectacularly bad dad he is when he managed to get his daughter’s age wrong - face/palm moment or what?

Now the couple face a whole new problem. Sophie’s world is about to be turned upside down when she discovers the dad who was the biggest support when she came out is in fact a dirty, cheating liar who fathered a baby with his best mate’s wife. So the baby she was helping to look after on Monday is going to turn out to be her half-brother. She seems to have her head screwed on but this may leave her pretty screwed up. She’s going to need the support of her girlfriend.

Kevin being kicked out of the house will of course solve the problem of having to fit five people round a four-seater table. If I had to choose a dinner guest out of Sian and Kevin I know who I’d choose! Then again it will create the problem of both Sophie and Rosie having to adjust to the fact they have basically been lied to for the past year and a half by their dad.

It’s highly unlikely Sophie will go completely off the rails and go on massive drink binges but it’s no doubt going to be hard for her to get her head around. Some people may question whether Sian would want to stay around with a family this unstable when she thought she had got away from broken homes when her mum decided her boyfriend and his fruit machines were more important than her daughter (yes really!).

The big question is will Sian stand by her girlfriend through all of this, and will Sophie allow her to? Will she simply push people away? There has been talk of the girls facing temptation, but I doubt Sian would be heartless enough to cheat on Sophie while she’s trying to get over the breakdown of her parents’ marriage.