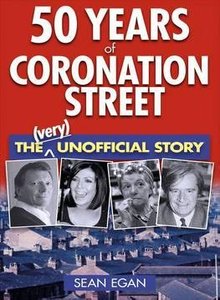 (This post was originally posted by David (Clinkers) on the Coronation Street Blog January 2011, reposted to this blog with permission.)

It's not often that you get the chance to review a Christmas present on a blog! However, Sean Egan's "50 Years of Coronation Street" has proved to be the ideal read for these cold, dark January nights. It runs the gamut of emotions felt by a selection of actors and crew. The likes of Alan Rothwell (David Barlow), with hindsight, considers that he may have left the programme too early whereas Geoff Hinsliff (Don Brennan) feels that he was possibly in the show longer than he needed to be. Egan makes a play of the numerous inconsistencies in the narrative of Street history and some of the more unconvincing characters. Plus there are comments galore from producers, scriptwriters and storyliners galore.

There's more about the book at http://clinkerstoriddle.blogspot.com/ and Flaming Nora's review of it here.

Have you read Sean Egan's book and, if so, what do think of it?

(edited to add: I, too have read this book and really enjoyed it. Canadian fans can get it at any local bookstore or via Amazon or Chapters online)
Posted by Tvor at 10:46